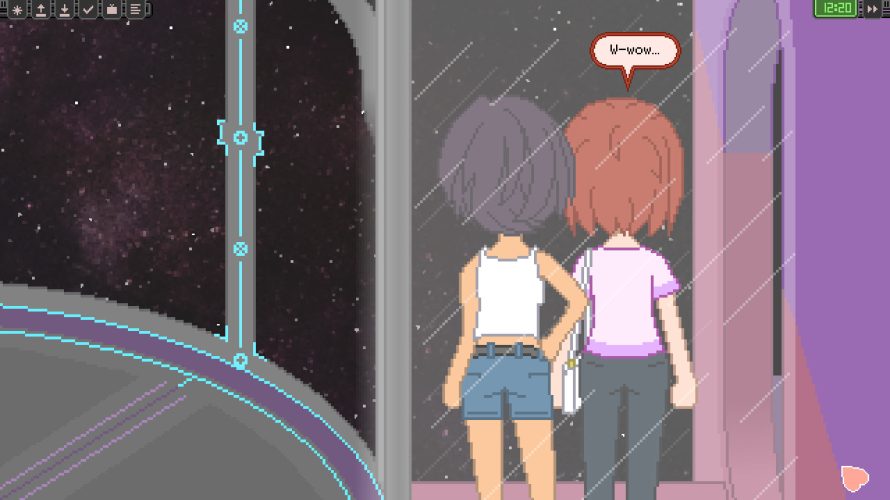 Love is weird at the best of times, and in Rose Seed Replica, it just might be waiting for Sophie, our heroine, at the far end of the galaxy. Incidentally, that is exactly where she finds herself after Bryn, for reasons unknown, decides to teleport her there. But wait – who is this mysterious person, and why kidnap Sophie? For an evil scheme? To make use of her scientist skillset? Or… is she simply lonely? Ah, so many questions in need of answers and even more choices to be made throughout this pixellated lesbian love story!

Still interested? Awesome! Because far as I can tell, we’re in for a treat here, what with this adventure being a somewhat lengthy, choice-driven journey that, quite frankly, ticks all the right boxes: 100+ choices, 170,000 words, multiple routes, romance types, and I believe those last two mean ‘multiple endings’. Always a welcome feature in a romance-centric experience like this. Even more so since too many games with a similar focus tend to only provide players with a single route/ending, and while that’s enough to satisfy some, I’d like a bit more… variety. More impact on the story, as it were; to have my choices actually matter, darn it.

On a related note, choices made in Rose Seed Replica might “incite various levels of drama and do some weird and funny things” on top of determining how you end up romancing Bryn and which dates the two of you end up on. Anything can happen at the end of the galaxy, after all, and with the help of a bunch of aptly described “strange individuals”, Sophie might eventually be able to make sense of everything happening around her, perhaps even form brand new friendships, depending on her actions.

Actually, ‘make sense of almost everything happening around her’ might be more accurate, seeing how Bryn is a mystery not easily solved. But perhaps a strong bond can be formed between the two, given enough time, resulting in Bryn lowering her defenses and reverting from that initial enigma state to instead resembling an open book. Perhaps. Only one way to find out!

Rose Seed Replica is available on Steam and itch.io, carrying a $9.99 price tag.