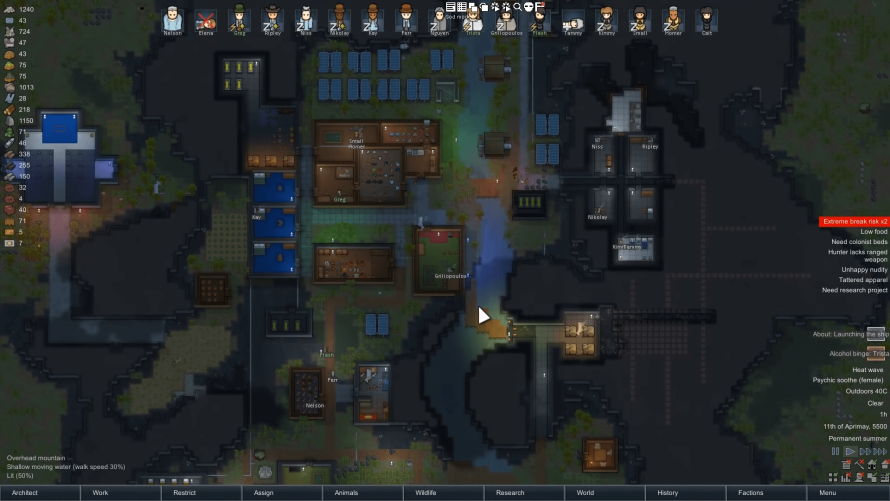 Three survivors crash on a distant world. No, that is not the beginning of a joke. It is in fact quite the opposite, as that is how RimWorld begins… and from there it’s up to you to ensure the safety and survival of this uncanny trio. How? Why, by creating a thriving colony, amidst forests, deserts, jungles, and other uninhabitable areas, fending off hostile natives (read: giant insects, pirates and ancient killing machines) as you go about your daily business. Won’t be easy, but at least it can soon be experienced in a non-Early Access state, which is bound to be rather lovely.

Well, that is what I want to say, but in reality, according to the developer, “1.0 is mostly the same as Beta 19, with a lot of bugfixes.” Not that there’s anything wrong with that, and 1.0 does bring about two very important changes to RimWorld: it puts the game out of Early Access, which is going to make it noticeably more appealing to the masses, and… a “food restriction system that allows you to determine what your colonists and prisoners are allowed to eat”. Yeah. Just remember that Joey doesn’t share food and you’ll be good.

But seriously, for those not familiar with RimWorld, it is described (again, by the developer) as a sci-fi colony sim, “designed to co-author tragic, twisted, and triumphant stories about imprisoned pirates, desperate colonists, starvation and survival”. This is accomplished through a multitude of random events, controlled/determined by the game’s AI (much like Left 4 Dead’s director feature), ensuring you’ll never get too far ahead of the curve. So to speak. If everyone suddenly drops dead, however, chances are you won’t really be able to pin that on the AI, so much as… something else. Yeah.

Ah, and you aren’t forced to stay in one place until the end of time either. Form a caravan and go exploring! Launch an assault on other colonies and steal their stuff! Or, if you’re feeling truly gutsy, pack up the entire place and… move. Everything. To a new locale. Just don’t forget to bring plenty of supplies for what will likely be a long journey, because this planet is absolutely massive and there is a lot to see and do. Far more than I am able to detail in this here article as its focus is after all still the upcoming exit from Early Access. As such, I’d recommend hitting the official website for more details about the game instead and prepare to be absolutely overwhelmed by its scope.

Disclaimer: screenshot is from the developer video below.

RimWorld will be available on Steam and out of Early Access come October 17, carrying a TBD price tag ($30 while in Early Access).