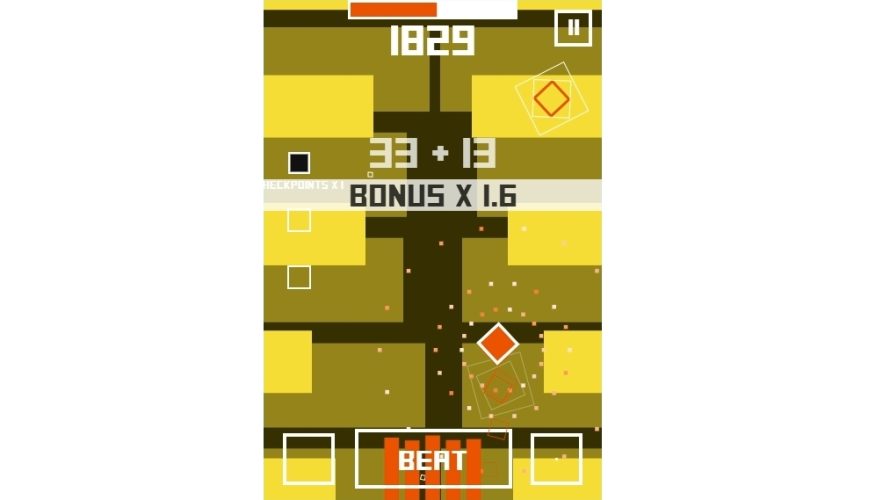 For the most part, endless games tend to be bite-sized experiences with simple pick-up-and-play mechanics, and Rhythm Square is no different. All you have to do here is move an orange cube left or right while tapping the beat as you fly over spinning boxes to stay alive. Oh, and there are boost items, because… power! Yeah!

Seriously though, what may sound like a simple and rather uninspired game, actually packs a fair amount of complexity. For starters, unless you nail both timing and positioning when ‘tapping the beat’ (or hitting space in the browser version), your life bar simply isn’t gonna last. Same goes for keeping a combo going, as that’s the best way to replenish the aforementioned life bar. It’s a good thing then, that the controls are tight and the screen isn’t filled with clutter, as that would be a tad troublesome.

Sooner or later, you’ll likely feel the need for something to tilts the odds in your favor, which is where power-ups/items come into play. These can be used to temporarily reduce the speed of the game, double your points, stop the life bar from depleting and other fun stuff; provided you manage to grab them before they fly off-screen, that is.

Oh and that simple, smooth-as-butter, nothing to worry about green-ish background? Don’t get too used to it, because at some point down the road, it’s gonna change. How does being thrown into an obstacle course, onto an icy road or being forced to play with inverted controls sound? Told ya Rhythm Square wasn’t just a simple ‘move and tap’ game!

All in all, the only thing I kinda disliked about it was that unlocking the three bonus levels (Inverted, Ice, Obstacles) felt like a grind-fest. You’ll need 30.000, 40.000 and 50.000 to unlock each, and after spending a good 15 minutes playing, my ‘beat points’ only read 7.128. Not that playing Normal over and over again wasn’t fun, mind you, but I’d have preferred if the barrier for entry on the other three were just a tad lower.

Rhythm Square is available for Android (Google Play), as well as in browser (HTML5) form.