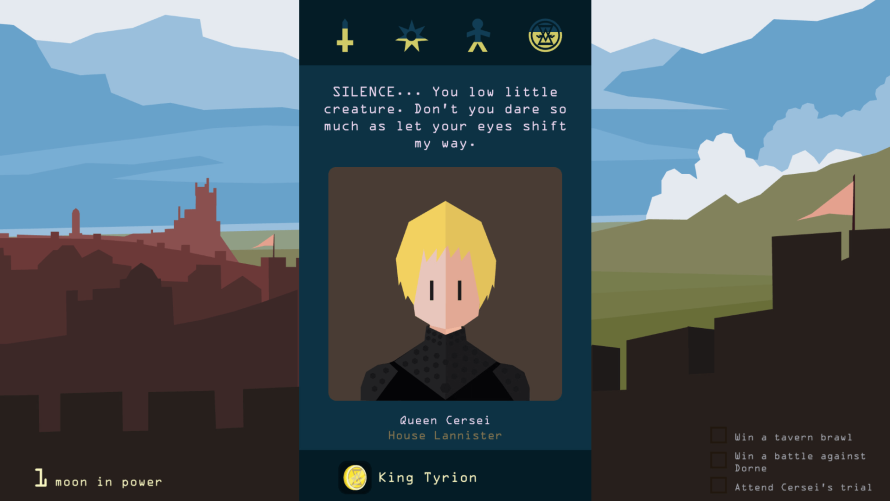 Winter is coming to Reigns: Game of Thrones, and if you want a chance at being more than a corpse with the arrival of spring, you’d do well to choose wisely in the time leading up to said potentially disastrous event. That is to say, swipe left or right to make increasingly difficult decisions, as you attempt to rule from the Iron Throne as Cersei Lannister, Jon Snow and other characters from the popular HBO series. Just keep mind, as you do, that every action has a reaction… and upsetting the wrong people can be costly.

That said, you won’t be spending every waking minute in Reigns: Game of Thrones, burdened with requests and demands from starving politicians (wait, what?), as a slew of mini-games also awaits with events far more trivial. Things like jousting and tavern brawls are on the menu for whenever you feel the need to unwind with some entertainment. Which will happen sooner or later.

Swipe left or right to change the fate of the Seven Kingdoms forever as you hear the impassioned pleas and unpredictable demands from the people of Westeros. If a particular character becomes bothersome, tear their card in half to unburden Your Majesty with their concerns – but at what cost?

Ah, but the lure of “what if…?” scenarios will surely bring you back to the story as it unfolds before your very eyes, forever changing the fate of fan favorites, your very choices giving life to a bit of fan fiction, as it were. Speaking of, how long will your reign last, and will you be a tyrant or a just ruler?

Reigns: Game Of Thrones - Gameplay Trailer
Watch this video on YouTube.
Facebook Twitter LinkedIn Pinterest Tumblr WhatsApp Telegram E-mail
Previous article 'Return of the Obra Dinn' - In Which a Merchant Ship Returns On Its Own, No Crew in Sight
Next article DreamHack Atlanta's Indie Playground Lineup Shows the Event Ain't All About Esports