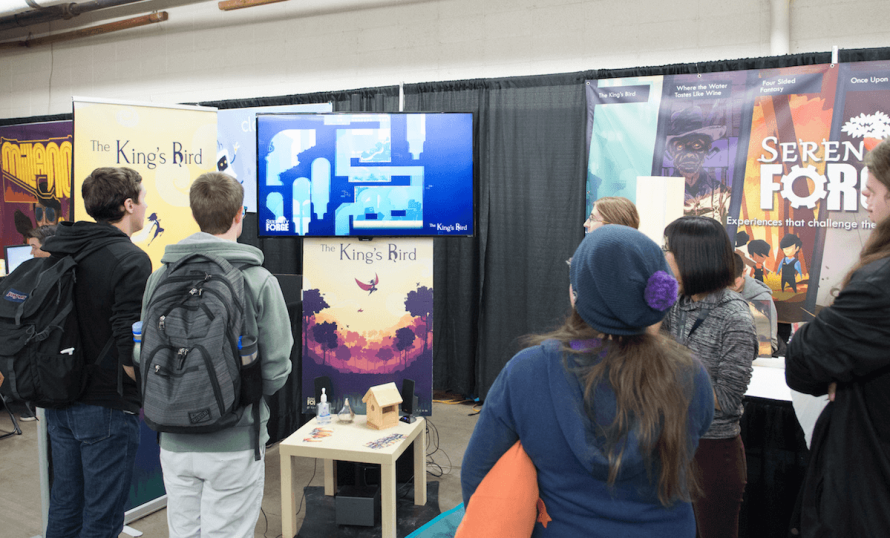 DreamHack Atlanta! Indie Playground! 49 games! It is going to be absolutely glorious. Glorious, I say. Glorious! Oh, and the whole thing is not far away, kicking off next month, esports and all. But mostly indie games, all 49 of them.

Quite the prestigious affair too, this, each ‘Best’ pick will receive “a complimentary 10’x10′ booth at the show, 2 tickets to DreamHack Atlanta, a 15 minute slot on the Indie Stage to talk/demo/do giveaways or anything they want, the title of “Best —” in their genre (all of the indies are given this title, not just one), and they will shortly be featured on our website.” Or in other words, “fortune and glory, kid. Fortune and glory.”

Also, before I forget: DreamHack Atlanta (November 16-18, 2018) tickets are available at the website. Alright, enough of that – it’s lineup time!

(Thanks to Indie Games Plus for the heads up.)

Iris.Fall
Iris.Fall is a puzzle adventure game featuring striking visuals and a spellbinding theme of “light and shadow”.

Forgotton Anne
Step into a hand-animated realm of wonder in which everyday objects take on a life of their own. Uncover the Forgotlings’ mysteries & harness magical forces as you embark upon a quest to return home.

UnderMine
UnderMine is an action-adventure, roguelike with a few RPGish elements tossed in (the good ones.) Delve into the UnderMine as a lowly peasant seeking fortune and freedom.

A Purrtato Tale – By the Light of the Elderstar
Comedic and filled with character and cats, A Purrtato Tail places the player in the paws of Queen Pixel – leader of the potato cats.

Hamsterdam
You hold the power to start a revolution in your paws, and only you can bring justice to the mean streets of Hamsterdam! Will you be the hero your town needs? Will you become the Hamster-fu master you were born to be?

Neon the Ninja
NEON THE NINJA is a punk rock platformer where you hide in plain sight and bring swords to the gun fight. Slay each boss and take their power if you don’t smash your controller first! Are You Ninja Enough?

Griefhelm
Griefhelm is a dueling game like Nidhogg, with a 3-directional combat system, meaning that you will need to chose the direction of attack and to avoid getting hit, you’ll need to block in the correct direction, or dodge the hit by simply moving (this won’t always be an option though).

The Last Friend
The Last Friend is a tower-defense game beefed up with strategic Beat ’em-up elements, where players must balance their attack and defense tactics to defend their mobile dog shelter.

Harvest Hands
Harvest Hands is a first person fantasy farming game. You play the Apprentice Farmer as they learn the ropes of managing their very own farm. Farm, craft and explore an expansive, vibrant fantasy world, and using your magical backpack, grow your farm into a thriving business and help the township of Willowdale solve a chain of strange magical mysteries.

BattleCON ONline
BattleCON tempers the fast-paced combat of a duel with the strategic decisions of a board game.

Element: Space
An interplanetary conspiracy threatens a fragile peace. Forge alliances, form a team and uncover the plot before it’s too late!

One Step From Eden
A deckbuilding roguelike with relentless real-time grid combat.

Swim Sanity!
”Swimsanity!” is a multiplayer underwater shooter with action-packed Co-Op and Versus game modes. You play as our hero Mooba, who uses a variety of unique power ups and weapons to survive in this aquatic world.

Steamhounds
Steamhounds is a multiplayer turn-based strategy game. Assemble a crew of fighters. Challenge your friends in head to head multiplayer battles. Fight for glory!

Collidalot
Strap into the torn leather seat of an apocalyptic jet car and grind for your life in Collidadot!

Pig Eat Ball
Fight, Solve, and BARF your way through 100’s of action-packed levels wrapped in a colorful, arcade-adventure world!

Cede
Conflict between brothers has cracked your planet into pieces with barely any crops and plants to survive from. Seph and his Lil Boi’s combine their abilities through Combat Farming in which monsters are burst into seeds becoming vegetation.

REZPLZ
REZPLZ is a pixel art puzzle-platformer where  1 or 2 players control two wizard brothers who possess the power of resurrection.

Disjunction
Stealthy and non-lethal, or quick and deadly. It’s up to you how you play Disjunction. Be careful, though, the story will change depending on your actions!

Depth of Extinction
In a world rife with violence, rumors of killer machines have spread far and wide. As a number of factions emerge – violently vying for power – you become the sole defender of humanity’s last standing government.

SAVAGE: The Shard of Gosen
A 2D action/platforming adventure with a healthy dose of RPG elements set in the hostile world of Lor, a pre-history fantasy setting. The slave-hungry Argeshii empire dominates the known world, old and false gods conspire; brutal combat is the only means of survival!

DON’T GIVE UP: A Cynical Tale
Don’t Give Up: A Cynical Tale is the sarcastic and dark comedic tale of Tris, an anti-social game developer and his quest to confront his inner demons. Balance the hilariously dysfunctional tragedy that is your social life while facing off with the phantoms of your inner conscious and those that would claim it alongside action packed freestyle combat.

Witch It
Witch It is a multiplayer hide & seek game set in a humorous, magical world. Brave hunters are tasked with finding the witches that curse their villages!

Summoners Fate
A fast and fun turn-based adventure where you use top-down tactical combat and collectible card mechanics to master your strategy.

Verlet Swing
Verlet Swing brings you energetic swinging in a world that would be best described as a fever dream. Swing fast, don’t crash and reach the goal as fast as possible!

Zarvot
Follow the charming story of two cubes as they put together the ultimate birthday present for their best friend!

She Dreams Elsewhere
You wake up in a foggy haze with one hell of a headache. The way ahead is dark and foreboding. You remember who you are, but not a lick of how you got there.

Deblockle
Deblockle is a casual strategy game of tips and turns for two players. Take turns flipping your blocks into adjacent squares and then moving them across the board.

SiNKR 2
SiNKR is a minimalist puzzle game. There is just you, hooks, pucks, and various contraptions you need to clean up each level.

Arcade Spirits
Arcade Spirits, a romantic visual novel, follows an alternate timeline set in the year 20XX where the 1983 video game crash never occurred. After a turbulent work history, you are granted employment at the Funplex, a popular arcade, home to a host of unique personalities and customers. Where will this new-found employment take you?

Death Coming
Death Coming’ is a non-linear puzzle game where you must harvest human souls ‘Final Destination’ style. However, pesky mortals are not your only problem, as the Agents of Light will do everything they can to stop you.

Raja Mandala
Will you use your armies to subject your neighbors or will you offer them friendship? Use envoys to establish relationships with those around you. Building trust is sometimes just as effective as domination. But riding a war elephant is so much fun.

Temporal Odyssey
Temporal Odyssey is a game of dueling Time Travelers. Open portals to different parts of space and time to draft heroes, monsters, and myths to your cause! Collect powerful artifacts to gain unique abilities from Lovox, the god of time.

True Messiah
A board game of surreal religious horror for 2-4 players! Recruit followers, build temples, and deploy a custom deck of miracles to destroy the false prophets who would dare challenge you.

Zer0 Inbox
Welcome to Reception. You’ve reached the lobby of Zer0 Inbox, the newest board game to break from the monotony of your corporate overlords. Forward your emails to your co-workers before you reach the Refresh Inbox square to win the game.

TwinCop
TwinCop is the most cooperative game, EVER. Play this action-packed, co-op, twin-stick shooter with your best bud or significant other. You and your friend are TwinCop: One player controls the right arm; the other controls the left arm, and both of you control movement.

COLINA: Legacy
Alex wakes up in his grandmother’s home. Alone and unsure of where everyone has gone, he begins escape, the feeling of someone… or something watching him lingering on his mind. Facing the unknown, Alex must make it through the night, and the house, before he loses more than just his mind.

The Subject
Play as a prisoner sold off to a deep-space testing facility. Navigate the maze, solve various puzzles set out for you, survive being hunted and learn the reason behind the testing.

Torn Asunder
Tear off their limbs, use them as weapons, conquer the environment, destroy the primevals, SURVIVE THE ONSLAUGHT.

Bring to Light
Trapped in the city subway system due to a sudden disaster, you explore the depths of the tunnels to find your way out. The further you explore, the more you realize there is more to this disaster…and the lurking shadows are following your every move.