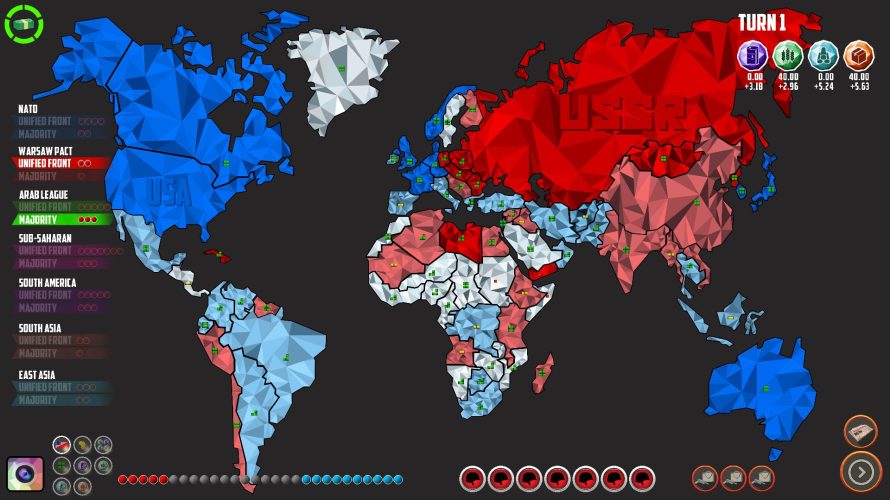 While the Cold War is certainly not a topic to joke about, in any form or way, it does make for a compelling video game setting. Even more so for strategy titles such as, say, Precipice, in which world leaders from no less than seventy-two countries have been realized “as animals native to the region” (wait, what?). Much like allies and enemies, resources must be managed in this tactical affair to prevent… nuclear annihilation.

You might have waged war on a global scale in video games previously, but I feel fairly confident in saying that none of them portrayed the Soviet Union leader with a bear, West Germany with a rodent, and so on. Chances are this lot is more than capable of kicking you-know-what and taking names, however, and if not, there’s always the nuclear option. But that’s the last resort. When all else fails, press the button. Pray it never comes to that.

​In Precipice, subterfuge is the most important strategy. Safeguard your closest allies and change unfavorable regimes without giving away your long-term ambitions. Every action risks an enemy reprisal, and if nobody backs down from a standoff, we all lose.

Whether you decide to duke it out against the AI or a human opponent, far as I can tell, only the United States and Soviet Union are actually playable, the other seventy countries merely there to “provide technical and economic assistance to guerrillas all over the world fighting for your cause”. Which is fine by me, even if it might make multiplayer matches somewhat restrictive.

The promise of a “highly-responsive, unpredictable AI” does make me want to experience solo skirmishes too though, as I test my strategic prowess in an attempt to rewrite the Cold War, likely failing miserably. Oh, and you can put a bear on the moon in this game. Well, I’m sold.