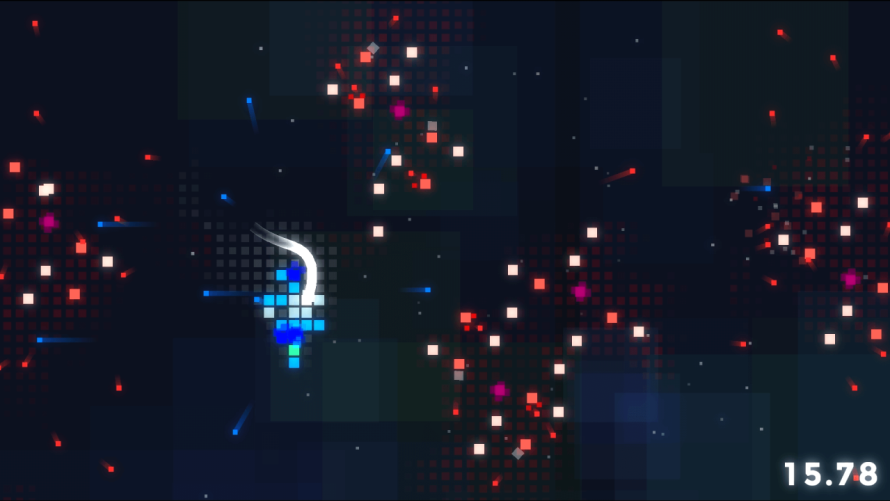 See all those pixels? They’re out to kill you. Every last one of them. What a pain, eh? So… why not turn them over to your side? No really, and it’s actually quite a simple task: make contact and they’ll latch onto your ship, expanding your arsenal and in turn, your odds of survival in Pixel Galaxy. That is, save for a select few which are much too set in their ways. Careful around those.

At its core, Pixel Galaxy is a colorful, arcade-y twin-stick shooter, except for the fact that you don’t really get to do any shooting. That’s not to say you’re completely defenseless against the never ending onslaught, however, as your aforementioned new best friends will do plenty of that for ya -- that or perhaps boost your engines, among other things. Just make sure the core of your ship (ie. that white tiny pixel) doesn’t collide with anything, as that’s an instant game over.

Every so often, you might survive long enough to piece together a sizeable vessel, and this is both a blessing and a curse. See, the larger you are, the harder it will be to navigate each bullet wave, even if it does -- in theory -- mean you’re better ‘shielded’ for what lies ahead. This is where the ability to rotate (left and right) comes into play, as gun-toting pixels will obviously not be able to fire at anything unless they’re actually pointed in the direction of a potential target, and… well, same goes for other defenses.

With levels being randomized and all, there’s no telling what pattern you’ll face next; save for perhaps, the boss fights. Provided you’re still alive once the timer reaches 99 seconds, you’ll have to square off against a massive, rather powerful being, so I’d recommend keeping an eye on your ‘attachments’ as the clock nears that point. Doesn’t matter to them if you’re a tiny defenseless ship or a well-rounded giant, as they’ll show no mercy either way (protip: neither should you!).

There are a few constants in Pixel Galaxy though, including the fact that pixel types are more or less tied to each of its six difficulty levels. Although I have yet to make it past ‘easier’ (the second), and each is unlocked by beating the prior, I can’t really go into great detail about those. I will say this, however: the challenge ramps up rather quickly, and like the pixels, RNG can either be your best friend or your worst enemy, as spawns heavily dictate your odds of completing a run. That along with skill, of course -- especially with the game’s bullethell-ish nature. On a related note, there are no upgrades or unlocks to provide an advantage. None of that nonsense.

Oh and as I’m sure you know, it’s dangerous to go alone, so… bring a friend! That is if you know anyone willing to travel to the Pixel Galaxy with ya on the same screen, as the game only has local co-op. Shame, but better than nothing still. Two ships are after all better than one, and should one fall, the other can perform a quick revive -- unless he/she should also fall in battle, obviously.

Now, on the visual side of things, the screen can get a bit chaotic at times, bullets flying everywhere, pixels running all over the place, and other fun things which can -- and probably will -- be the cause of more than a few deaths. Unfair? A bit, perhaps, although I’m sure that with enough practice, one can somehow negate this. Most of the time anyway. As for the rest, well, at least retrying is instant?

Potential business to the point of chaos aside, Pixel Galaxy does look really good, in spite of being a tad minimalistic, what with its colorful, shadowy effects and all. The music is darn good too. So much that I’d actually recommend spending an additional $4.99 to get the soundtrack as DLC. Just don’t forget to grab the base game first, as you’ll need that (why it isn’t available in DRM-free form is beyond me).

All in all, there’s lots of fun to be had and plenty replay value too, courtesy of online leaderboards heating up the competition alongside randomly generated content. While it may seem overly challenging at first, after a bit of practice, I’m sure you’ll be topping the charts on ‘normalest’ difficulty, traversing one Pixel Galaxy after another! Quite a groovy game, this one.

Pixel Galaxy is available from Steam (Windows, OS X) with a $9.99 price tag. Meanwhile, its soundtrack will set you back an additional $4.99.