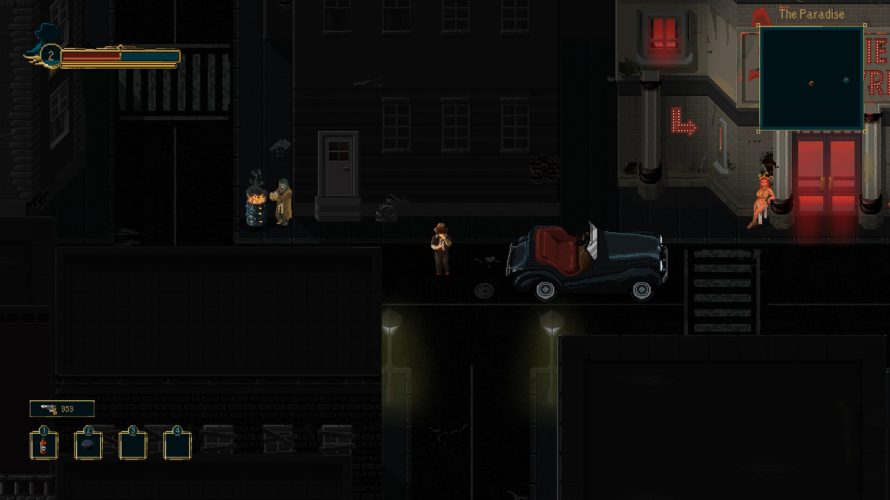 Mobsters. Generally speaking, not exactly a desirable bunch, being on the wrong side of the law and all. However, they are still quite human, which means that once one of them drops, that’s it. No coming back.  Unless you’re Pecaminosa‘s Charlie “Two Angels”, in which case… well, let’s just say that our protagonist has quite the case on his hands now, helping a mobster of all things, and a dead-yet-not-quite one at that.

Who says originality in detective stories is dead? I mean, helping the ghost of a dead mobster – when was the last time you experienced a story with that premise, interactive or not? The streets of Pecaminosa are dark and gritty, much like Charlie’s past, and in order to reach heaven, he must first atone for his sins. You know what they say: no rest for the wicked, and let’s face it, this guy knows a thing or two about wicked. Unlike John Souza, our detective-turned-drunk protagonist, who – like it or not – is stuck helping a deceased criminal. What could possibly go wrong in this pixellated film noir tale?

Let’s raise a glass or two to the good old times! Besides taking part in an intense and dashing narrative, you also get to fight against big, bad, bosses!

Most other similar games would likely have John Souza do his darndest at cleaning up these mucky crime-riddled streets, and maybe he will in Pecaminosa too – after accomplishing the task pushed on him by Charlie, that is. A task that is bound to require more than a little gunslinging, fisticuffs, suspect interrogation, and, you know, putting two and two together like any has-been detective worth his salt. Won’t be easy in a city dominated by crime and sin like this, but that’s life.

With a fair chunk of customization available in the L.I.F.E. system, whether Jack Souza has luck on his side, brute force, or both, is up to you. But however your version of him ends up, one thing remains a constant problem: you can’t trust anyone in this town. Come to think of it, that might actually just make life easier, as you won’t have to spend too much time thinking instead of simply… well… taking care not to end up eating one or more bullets. Best of luck. Jack’s gonna need it.

Pecaminosa is available on Steam and Switch, carrying a $14.99 price tag. PlayStation 4? Xbox One? TBA.