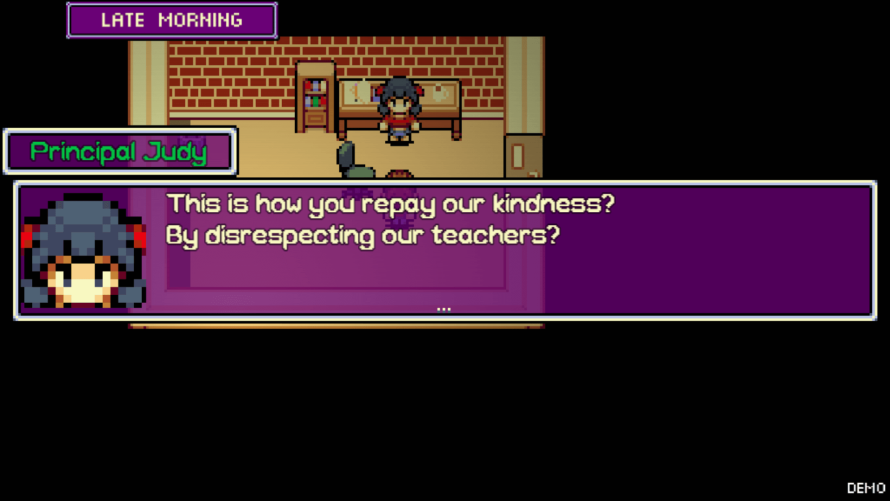 First day at a new school – what could possibly go wrong? Bullied? Arrive late to class? Unable to figure out where to go? Or perhaps something far worse? In the case of Mars, definitely far worse: the world ends, and then resets, every night. Does this mean his actions won’t have consequences? Is Mars free to do whatever, knowing that no one will remember, come midnight? Maybe. Maybe not. But it’d make a lot more sense, in the long run, to find a way to stop whatever – or whoever – is triggering this cataclysmic event in Mars Underground…

That’s how I see it, anyway, and while messing around with Mars’ surroundings can be fun for a while, sooner or later you’ll (hopefully) want to progress the story. I mean, based on my time with the demo, you’re likely going to experience the world ending several times over before everything’s said and done – even more so if you want to get the ‘true’ ending. Time loops are a strange thing after all, and who’s to say your actions will lead to, well, a happy outcome? No one, that’s who!

Take experimental prescription drugs. Talk to a toilet. Get hit by a car. Humiliate yourself repeatedly. All in the name of figuring out what on earth is going on.

Shouldn’t stop you from trying, though, even if there is a $2.299 Kickstarter beast to slay first. I’m sure that’ll be dealt with in no time at all, after which we’ll be able to grab a copy of the game… come September 2017. Yeah okay, so maybe not immediately after the Kickstarter campaign ends, which is on New Year’s Eve (this year, obviously), but hopefully it’ll be worth the wait. In the meantime, why not take the Mars Underground demo for a spin, find out what being stuck in a time loop is like?