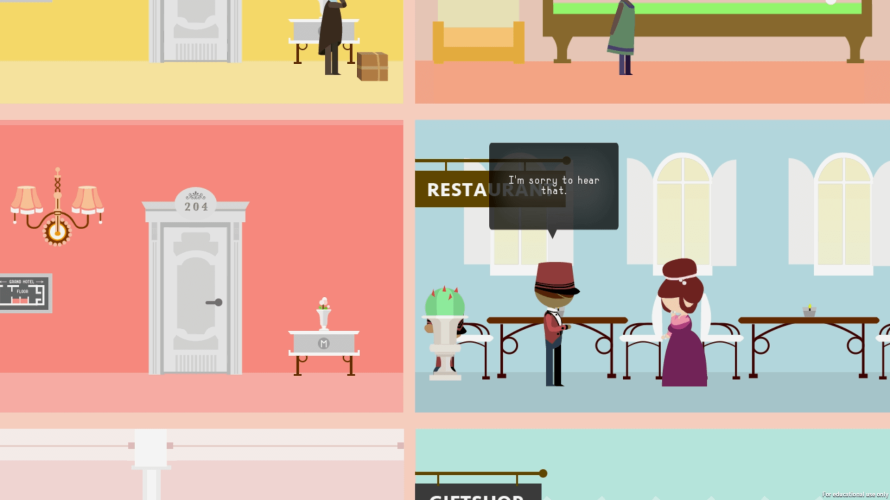 At first, everything about his new job seemed perfectly normal, performing various tasks for the manager as the new lobby boy. Check on this guest, catch wind of whether everything is to that guest’s satisfaction, find out who’s been causing trouble – you know, normal stuff. But then as night falls in Maquisard, a member of the Resistance suddenly appears, changing everything. Everything! Cue dramatic music.

Little did our nameless protagonist know when he went to bed on his first day, that the following would be one full of… well, spy stuff. Not that it’s overly different from his regular job though, as it features the same note-taking system, only a tad more complex, with lots more to keep track of.

See, a government agent has infiltrated the hotel, and it’s up to him – or you, the player, rather – to find out who it is. Needless to say, this is going to require some serious detective work, because while the Resistance has a few facts readily available about the person they’re looking for, they haven’t the foggiest clue how he or she looks.

Players must listen in on conversations, peek into rooms, and observe the guests’ habits in order to figure out which guests has all the traits of their target. Maquisard is a single-player puzzle game that has an unique non-linear investigation gameplay and draws on the visual aesthetics of Wes Anderson’s film The Grand Budapest Hotel.

But surely finding someone who’s staying at the hotel that fits the entire list isn’t super difficult, right? You’d be surprised, actually. Even more so, since everyone has a habit of moving around all the time, never striking up conversations when you’re nearby to eavesdrop and such. Oh and you only have three days to get the job done, so better get to hiding inconspicuously behind that plant. No, really – do that and those nearby will get really chatty all of a sudden. People are strange.

Should you get lost, or lose track of everyone, there’s a map on every floor, and interactable hot spots are clearly marked in the game, meaning you won’t be running around blindly, searching by mashing the ‘use’ key. Good stuff. Just remember that you only have three days, and this place is really incredibly stylish as well as sizeable, so better get to weeding out that government joker in Maquisard (PWYW) ASAP!