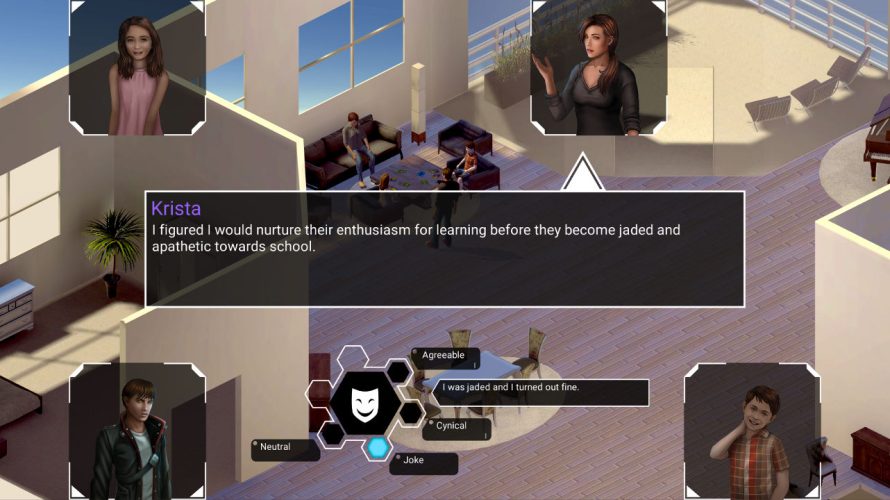 Every action has a reaction, every choice a consequence. That’s how it is in the real world, and as it turns out, also in Luckless Seven, the tale of a young man’s attempt at making something of his life. Oddly enough, this is accomplished – partially – through… card battling! That and a vast array of social interactions, all of which will help shape the future of Mark, the protagonist. Groovy.

Now, unlike so many other story-driven games, what happens to Mark is in no way set in stone, as depending on who you talk to, what you say, and so on, determines what happens next. Heck, play your cards right, and you might even unlock additional narrative, not to mention plot-lines. Plenty to do, see and converse with.

Ain’t all fun and socializing though, as you’ll often have to engage in combat, which is where Ekosi, a fast-paced card battler (literally) comes into play. At first glance, it may seem awfully familiar to the likes of Black Jack, but the addition of color coding on each card brings an extra layer of strategy in that… well, let’s just say you’ll have to consider more than the face value of a card. Confused? I’d recommend a glance at this video then.

So, why Kickstarter? Simple: they need more money to create proper assets (character portraits, animations and music). Luckless Seven has been in development for more than eighteen months now, which means this could very well be the final stretch for the project!

They’re gunning for $15,000 with 31 days on the clock and $1,628 pledged at the time of writing. Pre-order’s placed at $14, with a release window of April 2016, on PC, Mac and Linux. A demo is available for all three platforms from IndieDB. What say we get this one both Kickstarted and through Greenlight ASAP, eh?