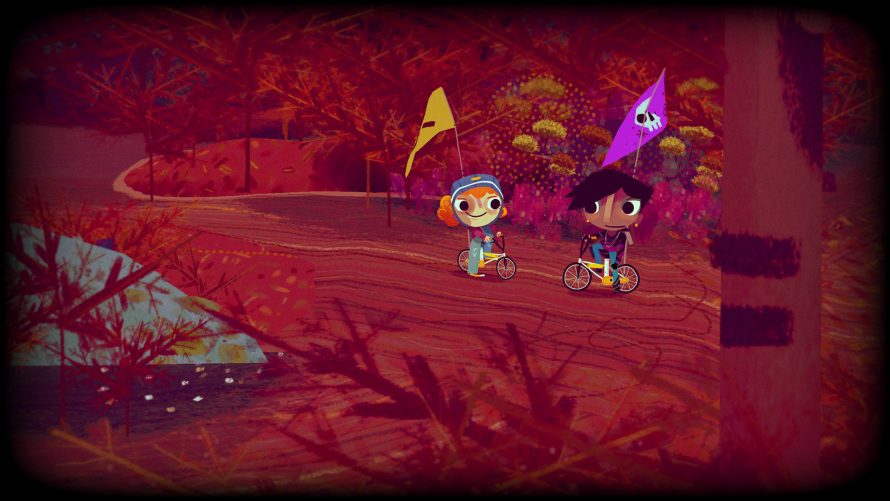 What could possibly go wrong when friends, accompanied by their pet goose and the pickled-head of an undead knight (wait, what?), goes biking to locate a legendary lost treasure? Everything, that’s what. Everything and absolutely nothing. I suspect Knights And Bikes is more of the former and less of the latter though, seeing how players get to fight baddies with frisbees and a boom-box, among other obscure weaponry. Now I really miss the 1980s.

Throw in some water balloons and “puddle-stomping welly boots”, and we’ve got a solid foundation for a good time. If you enjoy your games a bit on the silly side that is, as its creator claims this one’s “a Goonies-inspired tale of excitement”. Even though I personally didn’t care much for the movie, Knights And Bikes does still look quite enjoyable. Oh, and it also has a bit of a ‘rags to riches’ thing going on, what with how you’re able to upgrade that ever-important bike, paid for with, well, trinkets. Anything goes, really, from seemingly worthless broken action-figures to slightly more exciting finds like animal skulls. But the goal, the big one, will always be that grand ol’ treasure. It’s bound to be somewhere on this here island, and the two protagonists (and their pet goose… and… uh, something… undead knight) won’t stop until they find it!

Together their friendship will create an adventure as big as their imaginations.

Ah, speaking of which: as is the case with any well-designed game, two protagonists mean two playable characters, and in this one, you even have the option of bringing along a friend -- either online or on the same couch. Alternatively, you could just let the AI control the other character. But no matter how you choose to play, do not ignore Captain Honkers (the goose), for apparently, if kept fed and happy, he can actually help you find what you need. In theory. Anyway, are you ready to join the Penfurzy Rebel Bicycle Club in Knights And Bikes for the bicycular adventure of a lifetime?

Knights And Bikes is available on Steam, GOG.com, and PlayStation 4, carrying a $19.99 price tag.

Knights And Bikes Shout-Out!
Facebook Twitter LinkedIn Pinterest Tumblr WhatsApp Telegram E-mail
Previous article Discord's 'Nitro Games' Catalogue to be a Thing of the Past Soon Because... No One Used It
Next article Prove Your Worth as a Warehouse Employee in Colorful Block Puzzler 'Wilmot's Warehouse'