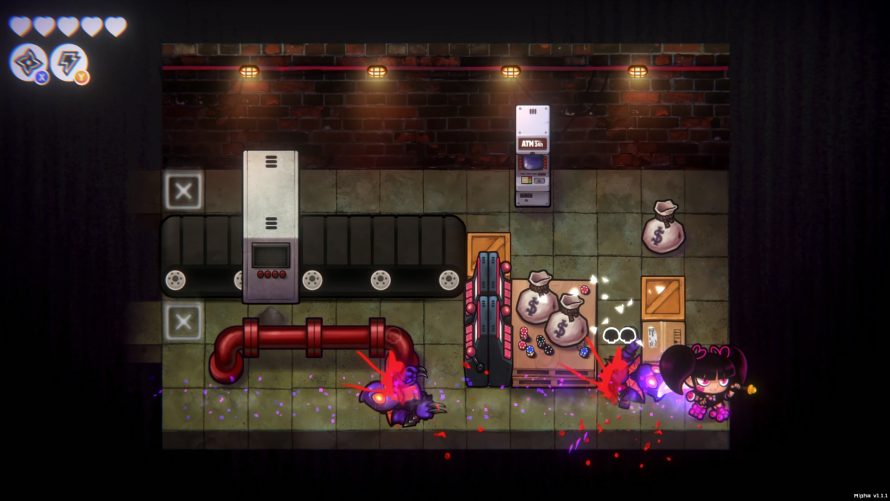 I know what you’re thinking, and while I am inclined to agree that slide puzzlers tend to be a mobile thing… there are examples of them both doing and being pretty darn good on desktop and console. Hopefully, that’s also the case with Keen: One Girl Army, a combat-centric tactical tale starring a grumpy little girl who wants nothing more than to save her village from an evil secret society (which one, though?).

As you can likely tell from the above screenshot, this isn’t exactly Sokoban (ancient slow-paced box/block puzzler, for those unfamiliar). No, this is more akin to a fast-paced turn-based brawler. Or some such. Anyway, fortunately for her, Kim – the protagonist – is not just any little girl: she’s the descendant of a lineage of female warriors, and guess what? The battle before her marks the beginning of her training! Robots? Brainwashed minions (of the non-yellow variety)? Nasty weaponry, laser grids, missiles, puzzling encounters? Yeah. None of that is going to stop her. Might slow her down a smidge as you, the player, plan her next move, however, but stop? Never. Not until the war is won and everyone in her village is safe once more.

Keen is a sliding puzzle game with turn-by-turn tactical combat and a hint of adventure!​

One thing that hasn’t changed from other slide puzzlers, is that enemies only move when Kim does, resulting in a tactical turn-based affair that still carries plenty impact. By which I mean, colliding with an enemy will open up a can of you-know-what! Yeah! Girl power! Ahem. Did I mention how zombies and ghosts are also featured, or how a slew of unlockables – including Kim’s special powers – await those with a keen enough eye for detail? Chances are you’ll need all the help you can get unless you take your time and plan meticulously because I highly doubt foes will think twice before putting an end to Kim’s rebellious efforts. War is, after all, hell. Keen: One Girl Army does look like an absolute blast, though.

Keen: One Girl Army is available on Steam and Switch, carrying a $15.99 price tag.

Keen - One Girl Army: Release Trailer
Facebook Twitter LinkedIn Pinterest Tumblr WhatsApp Telegram E-mail
Previous article 'The Curse of Cupid' Impressions: Fly as high as the sun!
Next article Scale it Down for the Love of Pixels: 64x64 is the Limit in Upcoming 'LOWREZJAM 2020'