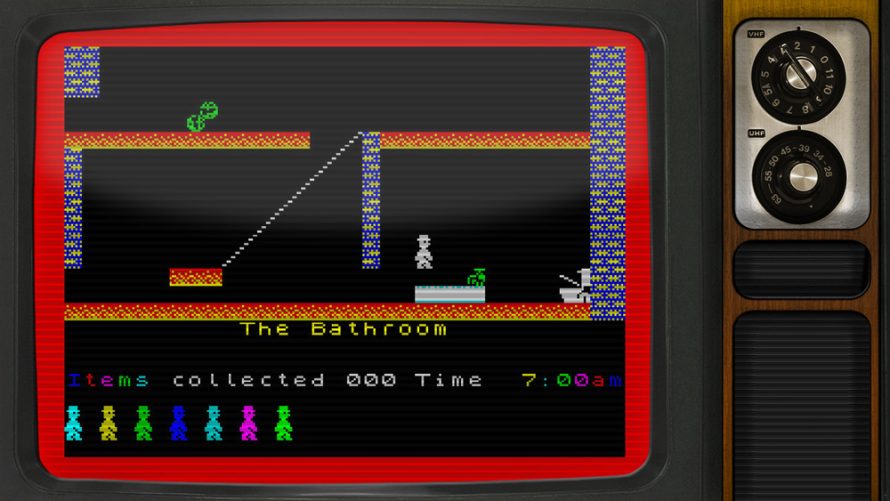 A sequel to Manic Miner and originally released back in 1984, Jet Set Willy marks the second XBLIG release from developer Elite Systems, the first being Manic Miner 360 which came out back in June.

In Jet Set Willy, you play the part of Willy and you’re tasked with tidying up a mansion along with its surrounding areas, which is made more difficult than it should have been, due to hazards in his path and even monsters that move along predetermined paths! This guy just can’t catch a break it seems and everything’s a one-hit kill, so caution is advisable as your 1up count is limited and.. well, no one likes the “game over” screen.

While it may sound like the entire world is trying to poor Willy killed, at least Jet Set Willy improves upon its prequel by being a nonlinear experience unlike the screen-by-screen style found in Manic Miner. It also brings along a larger world to explore, with a whoopin’ 60 areas (Manic Miner had 20) that needs to be tidied up before Willy’ll be able to get some much-needed sleep; nothing beats a quirky plot..

Elite Systems also added some improvements of their own when porting it to the 360, including a pixel filtering option for those who prefer smoothed sprites over the original pixellated look, an auto-save feature triggered by exiting the game and those who don’t mind cheating to beat the game, can flick the “infinite lives” switch on.

Wanna help Willy clean up the mansion? Jet Set Willy 360 is available right here, for $4 (240 Microsoft Points) and in case you’re interested in its prequel too, Manic Miner 360 can be found here with the same price tag.