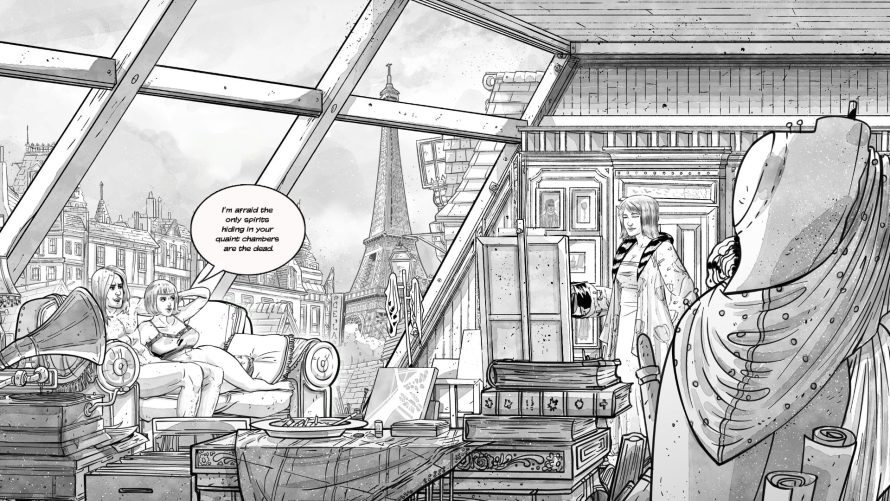 Paris in the 1920s can be a fun time, a simpler time, one of… well, for French artist, Jennifer Chevalier, murder most foul! The victim? Her father, of all people. Something like this would cause most people to have a mental breakdown, and this might actually have happened to the protagonist of Jennifer Wilde. I mean, to figure out what happened, an attempt is made to communicate with her father’s ghost. Needless to say, she does not succeed, bringing the spirit of one ghost of Oscar Wilde into our world instead. Oh boy.

A tad too silly? Don’t worry. Based on the much too brief demo, Jennifer Wilde is more serious than the premise lets on – even if a sizeable chunk of the puzzles seem to involve image manipulation in one form or other. That said, perhaps Oscar Wilde will lend a touch of comedy, to… raise everyone’s spirits (get it?). Perhaps he will. Wouldn’t know based on the demo at least, as it concluded with Jennifer’s father bleeding out on the ground, allowing us only a slice of the full experience.

More than enough to impress me though, and while brief, it did also manage to provide some insight in how everything worked, dialogue, puzzles and such. See, rather than the traditional list of responses during conversations, everything is handled within the current speech bubble –  a neat little touch that helps maintain immersion, if nothing else. And the puzzles? Oh boy. Not sure what to make of those I got to experience, but I will say this: logic was a large part of the equation each time, something I wish more recent point ‘n click adventures would stick by (no, not moon logic).

Jennifer and Oscar find themselves involved in schemes of murder, ghosts and intrigue as they attempt to solve Jennifer’s father’s murder, and develop a deep friendship along the way…

In fact, the only disappointing aspect of said demo was that it ended before Oscar Wilde even got to prepare for his grand entrance. So what say we get Jennifer Wilde funded on Kickstarter to help Outsider Games finish developing what I’m sure will be a lovely tale of mystery, intrigue and of course, murder most foul? With $4,420 pledged of $14,782 goal it does still have ways to go, but… there’s also three weeks remaining, the campaign ending on October 19. Honestly, I’d be surprised if this one falls short, impressive demo and all.

Did I mention how you really should try the demo, in anticipation of its November 2018 release (Windows, OS X, Linux)? Oh, and if the concept seems a tad familiar, it probably has something to with the fact that it’s based on Atomic Diner’s same-named comic. Groovy stuff.