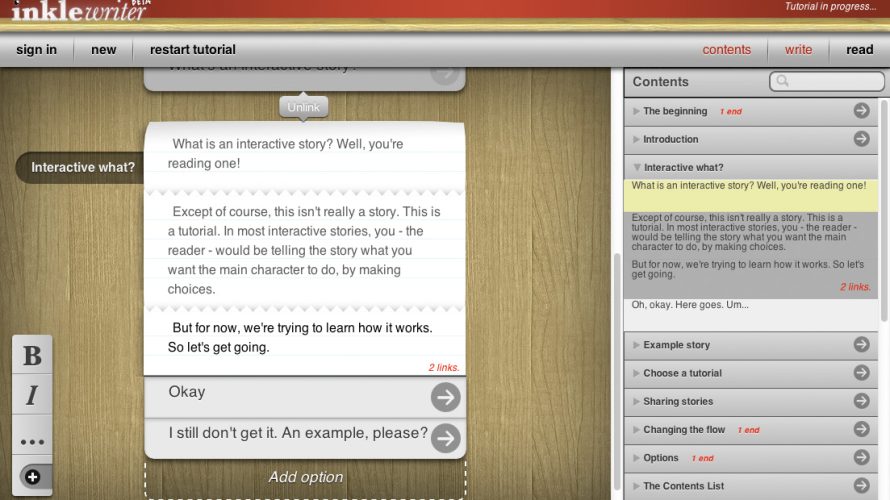 Interactive fiction. Gamebook(s). Choose-your-own-adventure. No matter which of those you are planning on making, the choice of engine is incredibly important. As such, while Twine is undeniably popular and with good reason, I have to ask: have you heard of… inklewriter? If not, hey, no better time than the present as not only has it resurfaced, it’s also open-source now.

As for what makes inklewriter so darn groovy in my opinion, well, first and foremost, how easy it is to get started with (and use). See, while the likes of Twine more or less throws you in at the deep end with an interface that likely has newcomer and veteran alike pondering where to even begin, inklewriter has a neat little interactive tutorial on top of its easily accessible WYSIWYG-ish interface. Meanwhile, Twine has, far as I can tell, a detailed guide/manual, more complex scripting support, and portability; inklewriter is after all limited to browsers (unless I missed something?).

Now, I am not saying that one is better or worse than the other – there are clear advantages and disadvantages to both, and after using them in almost equal amounts, I still have a hard time crowning a winner. But that’s not what this is about anyway, so to avoid this turning into a super lengthy A vs. B writeup, I’m gonna cut that short and get back to the topic at hand: the recent re-release of inklewriter. Because, my goodness, is that ever incredible news.

We’ve frequently used inklewriter ourselves for quick prototypes and sketches, and we’re over the moon that it’s getting a new lease of life in the open source community.

Described by inkle as a “write-as-you-go tool for sketching interactive fiction”, not only has the editor/engine been brought back, the reason for such magic occurring actually lies with a team of very talented open-source developers, believe it or not. After a quick glance at my old project, I’d say not much else has changed, save for it actually working properly on modern browsers of course, which is certainly also noteworthy. Oh right, speaking of old projects: seeing how the original iteration of inklewriter dates back to 2012, I’m sure there are those out there with a draft, script, or even a complete piece of interactive fiction, that they’d like to… you know, bring back. Fortunately, the process for doing so is by no means complicated and there’s a lovely step-by-step guide as part of this here post.

Last but not least, how about… an interactive press release? Not a bad way to show off your tech.

Introducing inklewriter!
Facebook Twitter LinkedIn Pinterest Tumblr WhatsApp Telegram E-mail
Previous article Puppeteering Skills Just Might Save a Lost Marionette in 'A Juggler's Tale'
Next article Straight From the Land Down Under, the '2020 Freeplay Awards' Have Begun Accepting Submissions