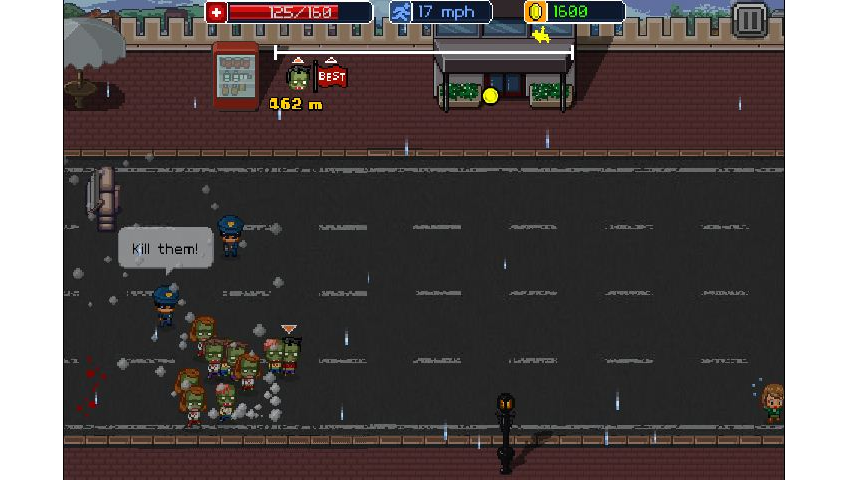 Play as one or more zombie(s). Chase reporter(s). Eat brains to keep running. That’s Infectonator : Hot Chase in a nutshell, and get this: I’m not really a fan of endless runners, yet something about this… brains… about… one… braaaains… BRAINS!

Wow. No idea where that came from! Seriously though, with endless runners being a dime a dozen, figuring out which are worthwhile and which are mere cash grabs can be tricky. I’ve played more than a few out of curiosity, and honestly, not a lot of them seemed too exciting. There have been exceptions though, however few and far between, the latest of which is Toge Productions‘ Infectonator spin-off Hot Chase.

In case you’re not familiar with Infectonator, it’s a game that tasks you with infecting the entire world, one country at a time. How? With an army of lab-created zombies of course! These can be upgraded between assaults, as you amass wealth, complete challenges and, well, destroy entire nations. Rinse and repeat until no humans are left alive. It may not sound like fun, but believe me, it most certainly is.

But what about Hot Chase? Well, while you won’t be unleashing a plague upon mankind there, the next best thing isn’t so bad: namely, a hot reporter! What? No, I’m not joking! For some reason, your sights are set on catching this human female. It’s a runner and she’s your… motivation; trust me, that’s all you need (or want) to know. Actually, come to think of it, that’s all I know too.

Anyway, colliding with pathetic defenseless humans lets you devour them (and/or their delicious brains), and this is how you keep running… and running… and running. I’m sure the chase ends at some point, but so far that has not been the case in my experience. Tapping and holding the screen moves your zombie(s) up across the four lanes while letting go drops them back down. With zombie fodder constantly approaching from the right, it’s a simple matter of being in the right lane at the right time. If things start to slow down, you can always use a booster (provided one is available); also, BRAINS! 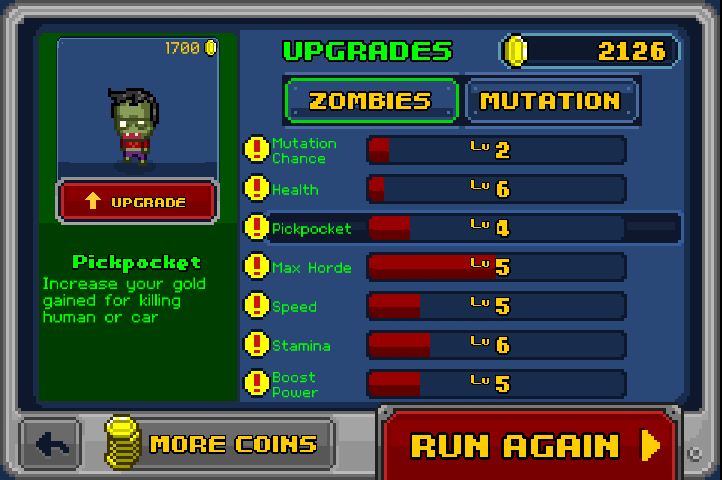 Wouldn’t be much fun without a carrot-on-a-stick, though, and rest assured that this aspect of the genre has not been forgotten. Between runs, you’ll be able to upgrade various stats and mutations, so there’s plenty of ways to improve your odds against those silly humans. How does increasing the size of your horde, gaining additional gold from killings and a higher frequency of mutation drops sound? Thought so. Haven’t met a zombie yet who didn’t enjoy some extra ‘firepower’.

Best as I can tell, mutations are triggered upon smashing into certain objects, at which point one of six types join your little undead gang for a brief period. CHARMING increases the distance at which people are, well, within killing distance, while SWAG does the same for coins (except, no killing). While the six certainly make for interesting additions, I kinda wish mutations were all leveled as one; guess that’d be asking too much from an endless runner, eh?

Genre entries with a leveling mechanic have a tendency to be rather grindy, and Hot Chase is certainly no exception. That said, once I’d gotten the hang of everything and after the first 30 minutes or so, my army of darkness was a force to be reckoned with. I rampaged through the streets like my life depended on it (which it kinda did), eliminating innocent bystanders and ending each run with enough coins for at least one upgrade. I (we) may not be strong enough to push on through the second area just yet, but there could be any number of reasons for that; including those darn cops.

Feel like running down the street, rotten flesh dangling from your bones as you scream “BRAAAINS!”, while chasing a news reporter? Then pick yer poison, Android or iOS, and get to running! What, the price tag? $0! Unless you dislike ads that is, in which case it’ll set ya back $2. That’s two dollars by the way, not brains.