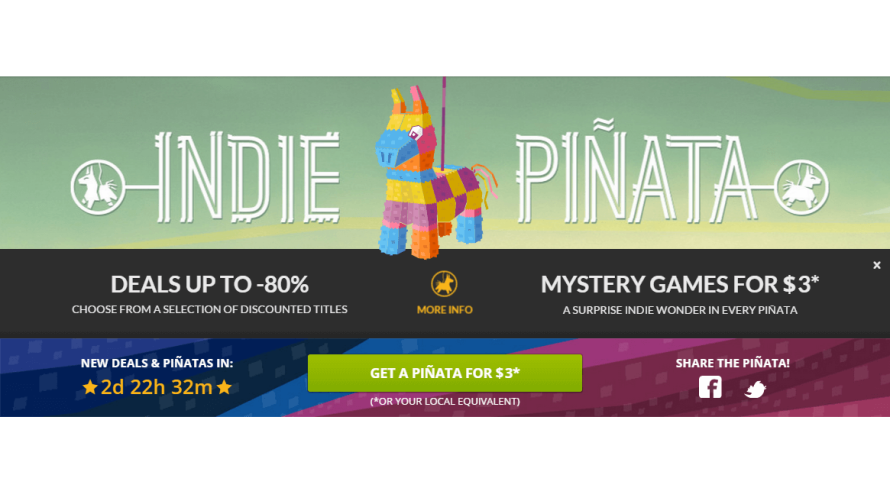 Everyone loves a good sale. Everyone. Don’t bother trying to deny it. The more we can get for our hard-earned money, the better! But… say we didn’t know exactly what we were buying, aside from the game in question being available from GOG.com, DRM-free (obviously), and costing $3. Crazy? Perhaps, and yet, Crunching Koalas is smashing prices in that very manner right now,  with Indie Piñata. Groovy.

While perhaps a tad too random for some, at least the idea is easy enough to understand: $3 spent on an Indie Piñata over at GOG.com lets you smash the darn thing, revealing a random indie game from their ever-growing library. There have been reports of users getting titles already owned, although after picking up a few myself, I encountered no such issue. A glitch or someone trolling? Hard to say, but chances are it’s easily remedied, courtesy of their Worldwide Money Back Guarantee, so there’s that.

Promo? Oh right, the sale isn’t just about smashing a colorful creation to get a cheap game. There are also lots of non-random discounts available, including – at the time of writing – the heavily tactical Door Kickers, and a deep, emotional tale, titled To The Moon. Just remember that every 72 hours, both known and unknown (ie. the Indie Piñata) deals are rotated. So best not hesitate if a title you desire hits that sweet price point.