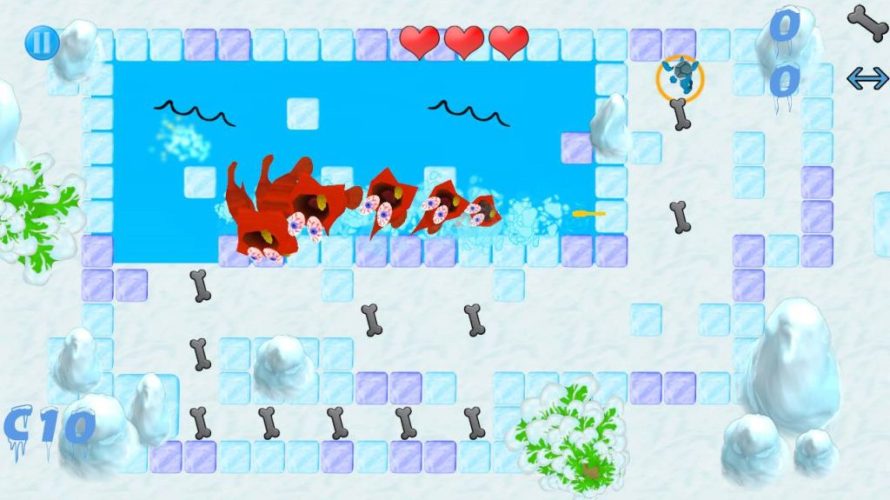 Life as a dinosaur ain’t easy. Even less so for Peter, Mohawk and Tori, who somehow ended up frozen in a glacier for millions of years! Time to bust out your Android or iOS device and help this uncanny trio escape.

To do this, you’ll be sliding across icy terrain pretty much constantly, picking up bones and freeing several steakosaurus along the way. There’s something special about these three too, as each has a unique ability. Mohawk can push boulders and Tori… has a way with fire. As for Peter, well, I’m not telling! Mostly because it’s not quite as interesting as the other two. Poor guy.

Each level has a rating attached in the form of three stars: one for using a minimum amount of moves, one for grabbing all bones and one for finishing the level. Getting them all is easy enough early on, but the challenge does ramp up later. Man does it ever ramp up. Oh and you can’t change direction mid-slide either, so if you’re after a perfect run, plan ahead or make friends with the ‘restart level’ button. With 100 levels full of brainteasers, those who enjoy going for 100% in their games are going to have their hands full with this one.

Everything from the devious hunter Van Hyde to the dangerous, carnivorous Tasukete is an obstacle on the way to victory.

Ugh. Van Hyde. Didn’t like him when I wrote my preview, and that hasn’t changed after playing the full version. Someone should take his musket away from him. That’d teach him not to mess with prehistoric creatures! Anyway, as far as I can tell, not a lot has changed from the build I played. Well, apart from the fact that the game now goes by the name Ice Escape: Steakosaurus Rescue, and is actually available to the public. I guess the latter is kinda important, eh? Especially since it’s… wait for it… free! No ads, no IAP, no hidden fees. Pick yer poison, iOS or Android, and get ready for a blast from the past.