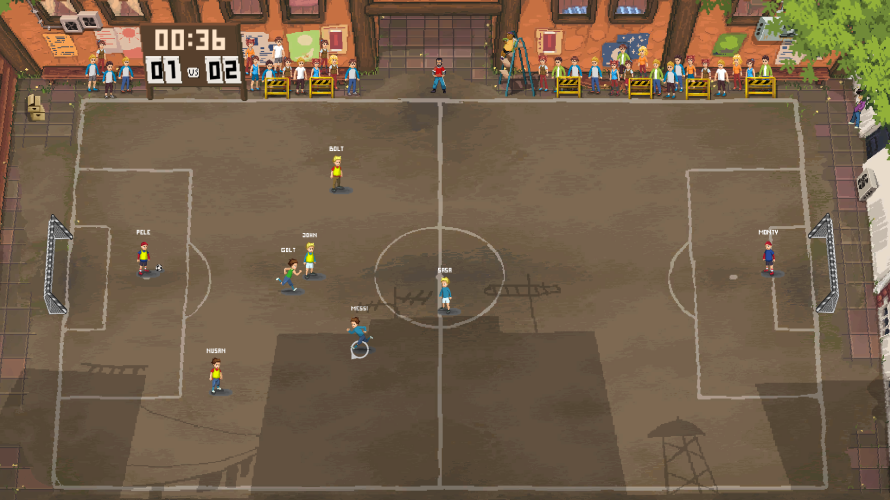 I don’t often come across soccer games with an actual story, even less so ones that don’t simply claim to have one, and then all the game contains in the end, is a lackluster excuse for a career mode. Not good enough. Just not good enough. What is found in-between Football Story‘s many matches, however… now that might even be a proper tale for the ages (or so I’m hoping).

Not that I don’t enjoy the odd running across the field, trying to kick a ball into the opposing team’s net, mind you. But this one will, according to its developer, “tug at your heartstrings in a narrative-driven single-player campaign” – a bold claim, to say the least. Whatever happens though, the streets of Highshore City awaits, full of fun – and soccer matches – with many an opportunity to make a name for yourself. One after another, opponents will try their darndest to put you in your place, so shape up or slip out.

Help those in need along the way, like saving Granny Masha’s cat from a tree or helping to fix hall lights in your residence to prevent injuries in the dark. Discover new locations and make new friends everywhere you go!

But when you’re not kicking the ball around, there’s an entire city in need of help, every last citizen more than willing to ask for a favor (or two). No would-be superstar – not even one supposed to spend his time practicing dribbling, tackling, shooting, passing, and so on – is too big to help those in need after all.

So get to chasing that cat out of the tree, fixing light bulbs so the elderly don’t fumble around and injure themselves in the dark, and other seemingly trivial chores. They’re anything but for those needing help, after all. Just… don’t forget to practice. That’s kinda important in Football Story.