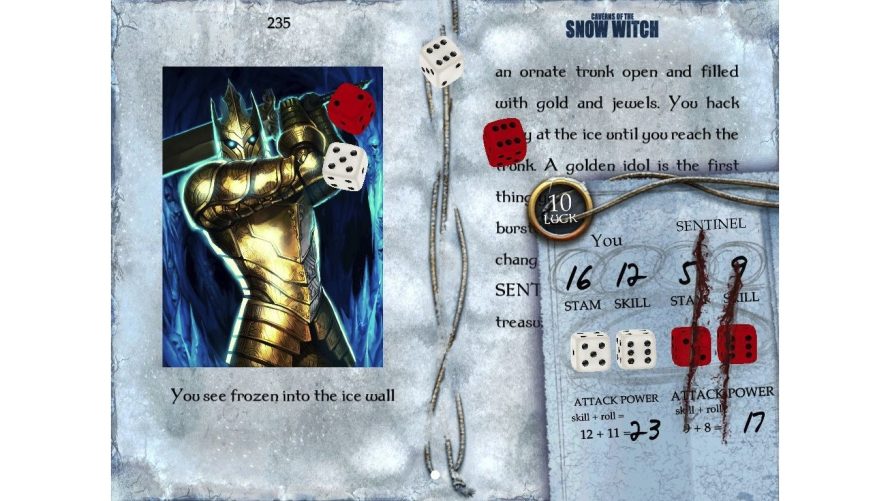 If I asked you to brave the elements and traverse the Crystal Caves of Icefinger Mountains, you’d likely think me mad, shake your head and walk away. Thing is though, inside this very locale, the wicked Snow Witch is working on creating a new ice age, and only YOU can stop her (surprise!) in this Fighting Fantasy classic gone digital.

Hard to believe, but Fighting Fantasy: Caverns of the Snow Witch was in fact originally released 30 years ago in print form. Considering the amount of Fighting Fantasy related articles I’ve written (and I’m far from done), the fact that I have a copy of the original book sitting on my shelf – albeit in Danish – is hardly all that surprising. Geeky, sure, but surprising? Nah.

Anyway, for this adaptation, as has also been the case with prior Fighting Fantasy digitizations, Tin Man Games have taken to modernizing the gamebook ever so slightly. For starters, the entire thing has been given a brand new art style (which can be turned off), meaning purists can breathe easy. Dice rolls, stat tracking, and inventory management? Well, in this version, dice are cast at the press/tap of a button, stats are automatically updated, just like the player’s inventory. Would be rather fiddly to require pen and paper for a digital gamebook, after all.

Deep within the Crystal Caves of Icefinger Mountains, the dreaded Snow Witch is plotting to bring on a new ice age. A brave trapper dies in your arms and lays the burden of his mission on your shoulders. But time is running out – will YOU take up the challenge?

Compared to the likes of Fighting Fantasy: Starship Traveller, this one is a more straight-forward affair. No crew management or ‘ship combat’. Just you, a set of dice and whatever you acquire during your quest through Icefinger Mountain, to thwart the Snow Witch’s plans once and for all. Doesn’t necessarily make it a bad book though, because there are times when all you want is a grand adventure without too much hassle; a hero/heroine, a villain and some background for both.

That said, make no mistake: you will die, and plenty at that, so don’t be too proud to use the bookmark system and/or difficulty setting, should those pesky dead ends prove too much. Even if you have to cheat, a victory is still a victory, in… Fighting Fantasy: Caverns of the Snow Witch!