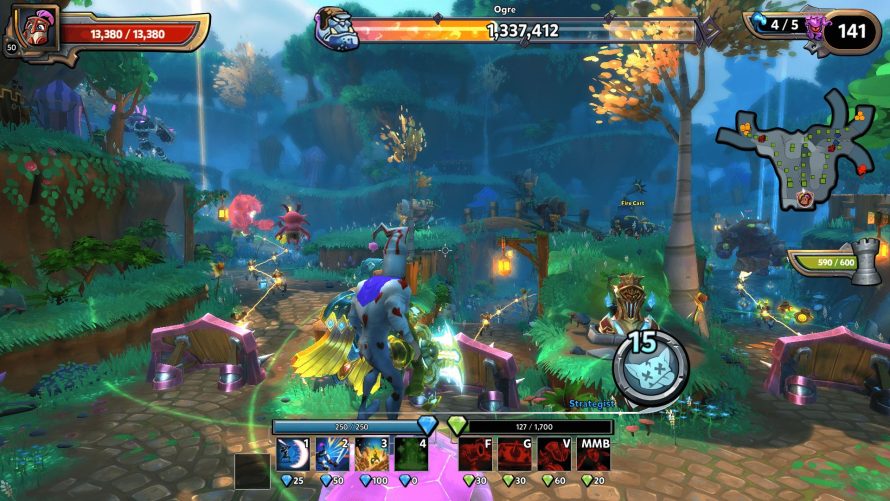 Dungeon Defenders II sure has had its fair share of hero additions over the past year or so. From the minion-summoning Abyss Lord to the beam-blasting Series EV2, cackling Gunwitch and last but not least, the fiery Lavamancer. Each hero comes with its own unique set of tools, and that holds true for the most recent, too -- meet the Mystic! Oh, and a revamped campaign, of course. Mustn’t forget that.

In terms of story and plot progression, Dungeon Defenders II has been, well, a bit all over the place. Not so following this recent update, however, as its eighteen maps are now carefully tied together under a banner divided by five acts. Yeah. Tied together and divided. Trust me, it makes sense. One story, eighteen maps, five acts, lots of bosses and… things to learn. No more level gating either, so if you wanna upgrade items at a low level -- which would be a tad pointless -- now you can!

A reformed thief with a dark secret, the Mystic struggles to control the ancient Serpent God in her gauntlet. Summoning powerful strikes, the Mystic harvests the souls of her fallen enemies, appeasing the slithering deity. But without a constant stream of enemy souls, who knows what her master might do?

While that’s pretty darn groovy, the patch brought way more too, including the aforementioned Mystic heroine, controller of snakes. That’s right, snakes. It had to be snakes. Anyway, unlike the Gunwitch which was a straight-up damage dealer, the Mystic actually brings defenses to the table, even if they are… snakes. And obelisks. And more snakes. Did I mention snakes?

Last but not least, how about some quality-of-life changes, like, say, the ability to start matches without waiting for that pesky countdown? Yeah. Been hoping to see that one for a while, personally. Sadly, the patch also fixed so Poison Dart Tower can no longer shoot through walls -- a fun bug while it lasted, and hey, PDT is still pretty darn powerful. So there.

Oh, did I mention how Dungeon Defenders II is a genuinely groovy F2P title on Steam and PlayStation 4?