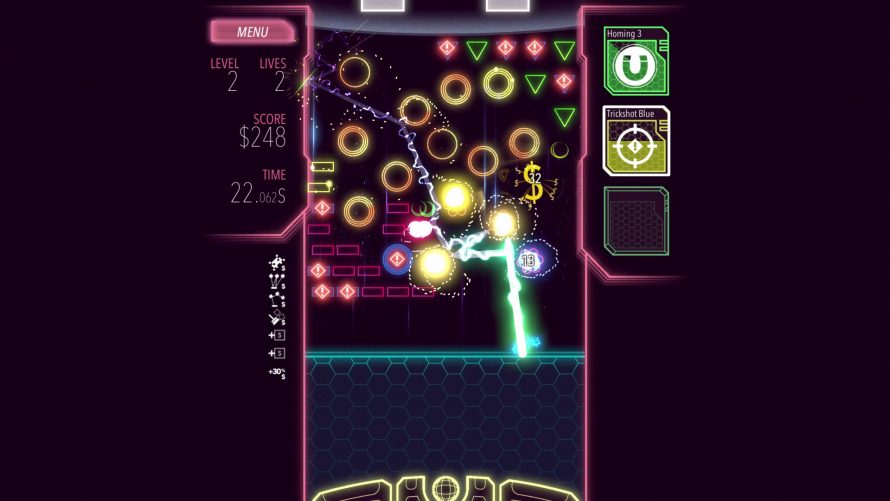 You might at some point in the distant past remember playing the likes of Breakout or Arkanoid. Brick breakers have been around for decades now, after all, and while the classics are undeniably still enjoyable… isn’t it about time someone cranked it up to eleven, bringing the genre into the 21st century? Drawkanoid looks like a game that’s trying to do just that (with additional neon and fewer paddles).

Now, I know what you’re thinking, and I hear ya: a brick breaker without a paddle? Madness, surely! Well, yes and no. I mean, okay, maybe the paddles aren’t completely gone. They’re just not always present, unlike in pretty much every other genre entry. Instead, each of the randomly generated levels will have you… draw the paddle? Don’t worry – that bit didn’t make sense to me either until I saw it in the trailer below. Then it made perfect sense. Also, bullet time and oh so many quite lovely explosions. Both of which are sorely missing in the original Breakout.

Hyperspeed neon brick-breaking with bullet time and explosions. What more do you need? How about ludicrous powerups and multiple game modes? You’re welcome.

Ah, how about some ship upgrades to truly crank up the crazy? Like, say, additional ball damage (wait, what?), trickshots, homing shots, extra lives, and so much more. If you got the (in-game) currency, so many groovy additions can be smacked onto your ship, making the screen-filling brick smashing explosions even more ridiculous. Brick breakers don’t get more flashy or fast-paced than this, and that’s certainly not a bad thing. Unless you prefer your games to be slow, dull, and completely void of any kind of visual spectacle. In which case, well, this probably isn’t the revamped arcade classic you’re looking for.

Drawkanoid is available on Steam, carrying a $7.99 price tag.