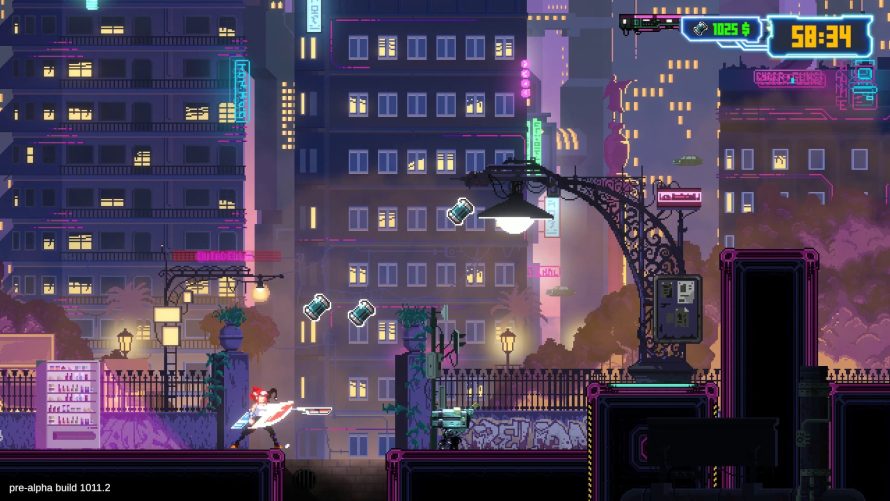 Jackelyne Tywood is back! “Who?” Oh right, it has been several years since Dimension Drive was released, and given how fast the industry moves, I’m sure most have sadly forgotten about that rather unique and interesting shmup. Perhaps that’ll change soon, for not only are we getting another game set in the same universe this year -- Aeon Drive -- its protagonist will also be making a dashing return… in a completely different genre.

Now, I’ve never been to Barcelona, so I couldn’t really tell you how 2Awesome Studio’s cyberpunk version compares to the original. Then again, does it really matter when it looks so darn groovy? No. No, it doesn’t. But as I’m hoping you’re well aware of at this point, a lovely art style will only carry a platformer so far -- unlike Jackelyne’s teleportation dagger, which is likely going to help her cover quite a lot of ground. Other fun stuff in her arsenal includes… let’s see… a sword, and… oh right, the ability to control time!

Obstacles, enemies, and falls are your worst enemy, as time is always slipping away…

That said, I’m not entirely certain as to how it works in-game, but far as I can tell… long as you have time-warping crystals, mistakes won’t be, well, fatal. Run out, however, and that’s all she wrote. I think. Whatever the case, I definitely like how this -- to some extent -- creates player-controlled difficulty. Kinda like the rewind feature in so many modern racing games, no one is forcing players to use the ‘assist’, but it’s there for those who need it. Which means I’ll be hooked on crystals in Aeon Drive, for sure.

Ah, in case anyone’s confused as to why Jackelyne is going through all this hassle, well, dimension-bending machinery needs to be fixed to preserve the space-time fabric of the universe. At least, that’s how the developer describes her mission. Sounds like as good an excuse to run, jump, slash and teleport through a lovely pixellated platformer as any, to me.

Aeon Drive will be on PC and console at some point throughout 2020. Meanwhile, those on the Discord will be able to access the alpha… soon.