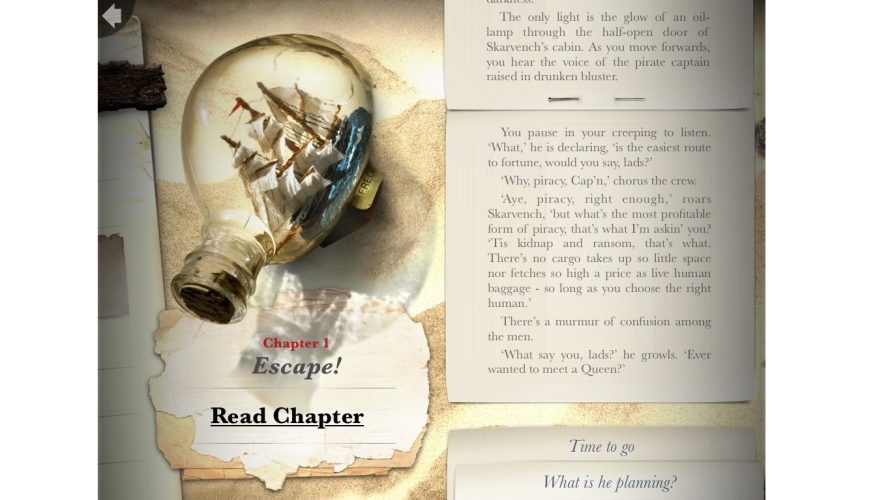 A pirate I was meant to be… or so the latest digitalized gamebook from inkle would have me think. Like Sorcery! and 80 Days, Down Among the Dead Men also uses their inklewriter engine, and this time, you finally get to play a swashbuckler on the high seas! Thwart the plans of Skarvench, the most fearsome pirate around, or die trying.

Ain’t an easily fulfilled quest, however, seeing how only a few trusty crew members and a ship (of sorts) is available from the get-go. You are in control of the entire thing though, which means it’s up to you to decide which direction to steer the vessel, whether to stick around when danger presents itself or play safe, speak your mind or keep quiet, and so on.

But before you get to all that fun stuff, the character creation process awaits, since the game basically presents you as a blank slate. Available choices here include being a witch, a thief or a governor’s daughter, among other things; these are more than mere ‘behind-the-scenes’ stuff too, as they often define available options. A thief, for example, wouldn’t be versed in the art of magic but might know how to apply a touch of stealth, while a governor’s daughter is bound to be the influential sort.

“Down Among the Dead Men” provides a fully adaptive text, that rewrites itself on the fly based on your decisions. Survive or fail, be bold or cowardly, lead or connive – the choices are up to you and every one is remembered.

Following that, your grand adventure – and quest to take down Skarvench – can begin, during which I’d recommend careful consideration at each ‘intersection’. See, unlike certain Fighting Fantasy titles, here, all decisions are final. In other words: the consequences of each action weighs quite heavily, as there’s no going back, should disaster strike (which it likely will, sooner or later).

Spanning a total of 9 chapters, including the prologue and epilogue, Down Among the Dead seems like a breath of fresh air amongst all those fantasy and sci-fi gamebook digitizations we’re seeing as of late. It also carries a rather low and attractive price tag, making for an adventure on the high seas, that’s almost… a steal.

Down Among the Dead Men is available for iOS (universal, iTunes), priced at $0.99.