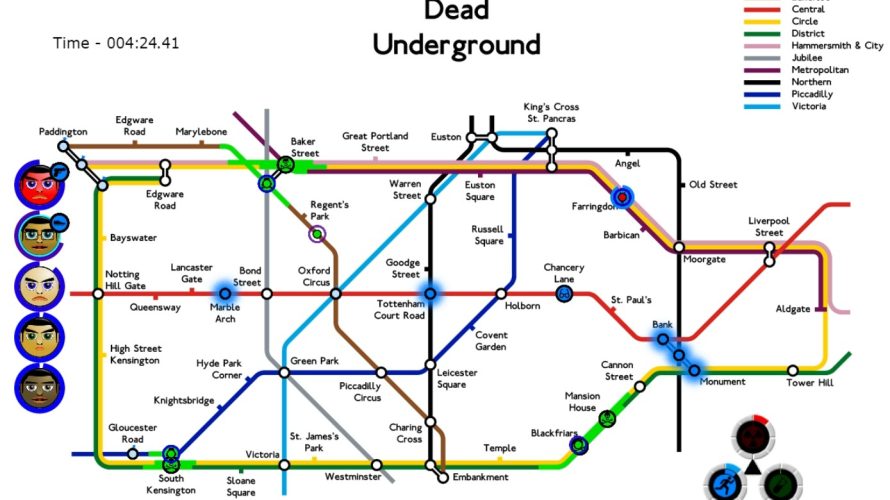 Ugh. Zombies are everywhere these days, and now the braindead jerks have taken up residence in The London Underground too! Fortunately, the outbreak is limited to Smudged Cat Games’ Dead Underground, and… there is a cure. That’s the good news anyway. The bad? Researching it will take a while, and the undead aren’t the most patient lot. So fortify major stations, kick ass, take names, and you just might live to tell the tale.

It’s rare for a zombie-themed video game to impress me nowadays, but Dead Underground did just that with a clever twist on tower defense. Upon starting a new game, you’re immediately put in charge of four survivors, each placed at a pre-determined station, ready to fend off the undead. Over time, everything from zombies to useful items and survivors will randomly appear across the map, so you’d do well to get everyone into position, and quickly at that.

Since everything plays out on a map of The London Underground, there are no shortcuts or secret passages. You have to follow the same route as The Tube when sending someone somewhere, be it to pick up a gun (increased attack strength), shoes (increased movement speed) or to teach zombies a thing or two. This can be a bit confusing at first, but keep in mind that the game can be paused at any time and that you’ll always be shown the path traveled.

Now, fortified stations play a crucial role in determining the outcome of this crisis, as these ‘safe havens’ not only heal survivors, they are also research stations, and you do kinda need that cure. While only a few are available from the get-go, more can be created by leaving someone at white circles for a certain amount of time. The more of these you have, the more ground your team of dedicated zombie fighters can effectively cover, minimizing the response time on each outbreak report.

But while rescuing survivors, equipping them and laying waste to Mr. and Mrs. BRAAAAAINS is important, you mustn’t forget about the research aspect. Clicking the tiny triangle in the lower right corner lets you divide attention among napalm, increased movement speed and the cure. Needless to say, I put it on movement speed and nothing else immediately, as having everyone run and not walk, makes things much more manageable. Zombies may be slow, but even so, there’s still a fair amount of ground to cover.

Each item can be researched seven times, and once the cure reaches that point, it’s game over for the zombies; or the viral infection, rather. But be careful, because it’s far from difficult to end up completely overrun, one survivor after another falling prey to the undead, resulting in the bad ending (“your attempt failed after x minutes”). So tell me, think you’ve got what it takes to cure a viral outbreak in… Dead Underground? BRAINS!