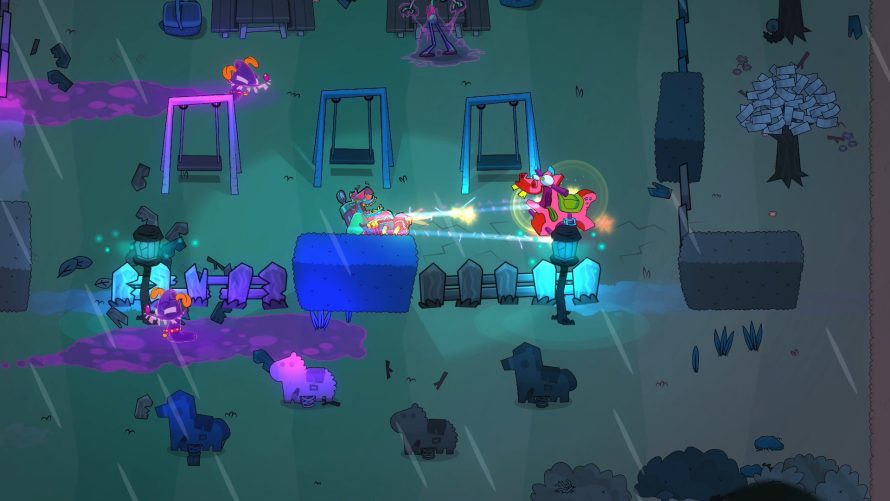 Remember how bustin’ made people feel good in the mid-to-late 80s? No? Okay. Hmm… ever find yourself stuck in a Dead End Job? What? Wow. Alright, here’s my suggestion then: strap a vacuum pack to your back and get ready to suck up oh so many pesky ghosts… while raking in the bucks. All in a (rather different from the norm) day’s work!

That said, it seems this particular solver of otherworldly problems – who carries the rather fitting name of Hector Plasm – isn’t overly fond of, you know, not destroying everything in sight to get the job done. But hey, that only adds to the fun! The more mayhem and destruction in a game as zany as this, the better.

If, for some reason, the monetary gain from taking care of ghastly apparitions isn’t enough of a motivator for ya, how about saving the ghost of your mentor before she’s… “forced to spend eternity as a spook”? Wait, what? Alright then. Certainly sounds like the kind of gig one might be interested in bringing a friend along for, and it just so happens that Dead End Job has drop-in/drop-out couch co-op, making for a perfect team-building exercise. I think.

On top of that, how about Twitch and Mixer integration to help your audience do more than just watch and comment as you go about sucking all day, every day. Ghosts that is. By way of many groovy tools, gadgets, gizmos – you get the gist, surely.