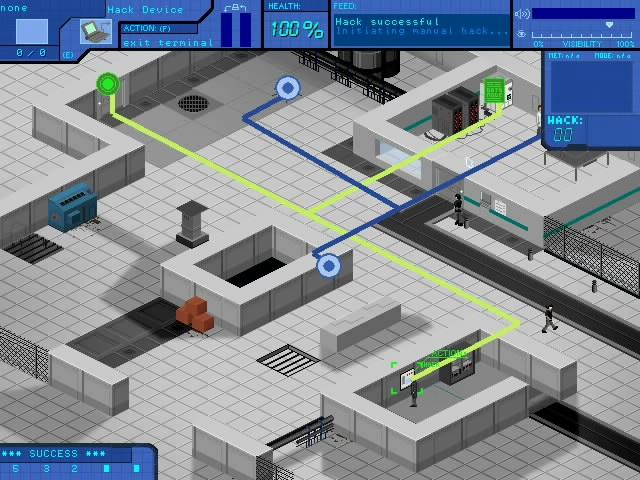 There used to be a time where cyberpunk games were all the rage, with classics like Syndicate, System Shock and Beneath A Steel Sky. But that was then and this is now: enter DataJack, a 2D cyberpunk game with plenty of hacking and gunslinging, just like in the good old days!

Welcome to the year 2030, your role is that of an unnamed mercenary who’ll work for whoever’s willing to pay for services rendered, be it assassination(s), hacking or anything along those lines. What’s that, afraid of the cops? They’ve long since been replaced by a military force, which makes getting caught a terrible (not to mention lethal) idea, as they don’t seem to ask questions before emptying a mag or two into lawbreakers.

But it’s not all about being sneaky-sneaky in the world of DataJack, as plenty of weaponry is available to the player as well, ranging from basic (and rather dull) shotguns to more hi-tech stuff like railguns, all modifiable to suit your specific needs. On top of that, since no cyberpunk game would be complete without it, you also get to mess around with implants to further help stack the odds in your favor.

Oh and the terrain is destructible, so I wouldn’t rely too much on hiding behind objects or walls, but no one is going to think any less of you for going with a stealthy approach instead of running in guns blazing, even if the latest trailer does make gunplay look like a bloody (get it?) good time!

Sadly there’s no release date yet, and the trailer (below) doesn’t exactly make the waiting easier, but I’ll be sure to let everyone know when the developer reveals one such.