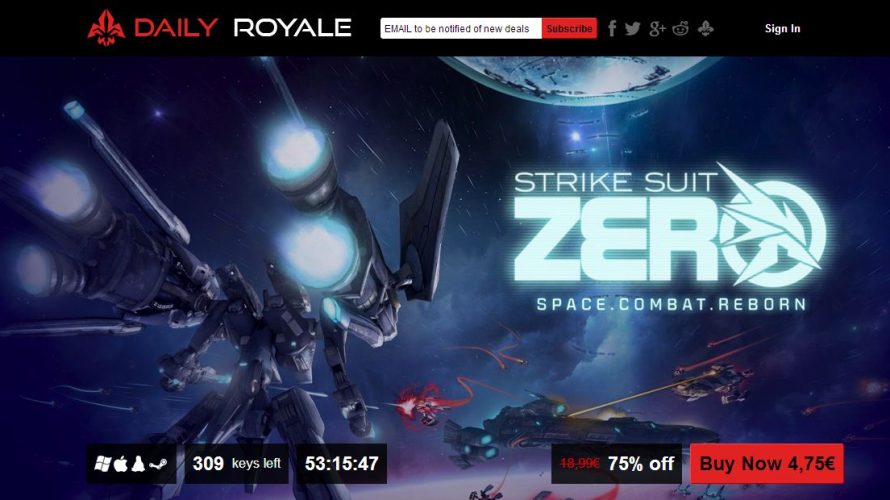 This is certainly a nice surprise. With more than sixty bundles to their name, Indie Royale is a force to be reckoned with, and now they’re running individual deals too! There’s a catch though: you’ll have to act fast, as the supply is limited. That said, there are still 300+ left of the current deal, and they’re not exactly flying away.

Unlike their bundled efforts which focus on indie games, for the most part, Daily Royale will offer a mix of indie and AAA; might explain why there’s no ‘indie’ in its name, eh? Anyway, the current deal is 75% off Strike Suit Zero (Windows, Mac, and Linux). While there’s both a finite number of keys and a countdown, according to the FAQ, their “ultimate goal” is to put a new game on sale every single day – but not for a few months.

While an undeniably great initiative, it does also make me slightly concerned. I mean, given the frequency of indie game deals these days and how soon after launch they tend to drop, is anyone still buying them… at a high price? But since we’re talking digital goods here, it’s not like developers are going to lose money, just make less from each unit sold. Besides, discounted games do have a tendency to shift more copies than full priced ones, so chances are it’ll even out in the end, making my concerns entirely unfounded.

Indie Royale will continue to bring you regular bundles of great indie games as usual.

No surprise there! If you’re a developer interested in having your creation featured, send an email to developers@dailyroyale.com, with its name, a video link and a list of platforms (Windows, Mac, Linux, Steam, Desura, etc.). Note: unlike the bundles, Daily Royale deals will not be covered here, but the aforementioned FAQ lists several ways to be notified, so do check that out.