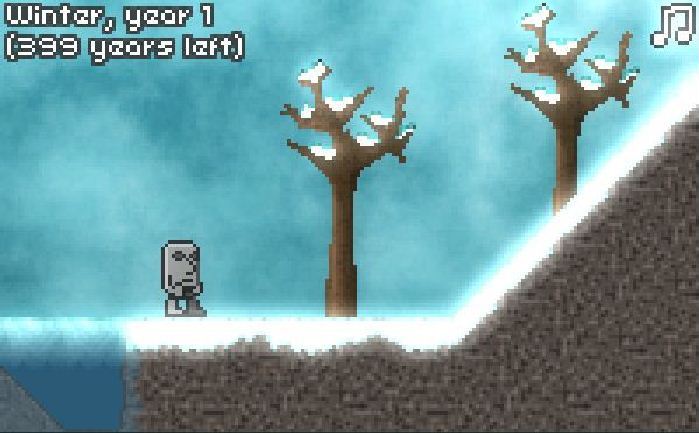 Generally speaking, mankind isn’t exactly known for being patient. It’s a good thing then, that the protagonist in 400 Years isn’t one of us, instead being a statue of sorts. Looks a bit like those from Easter Island. Whatever the case, you have 400 years to prevent a great disaster from happening and guess what – that might not be enough!

In case that first paragraph didn’t give it away, 400 Years is a game about patience and experimentation. It’s also one where the journey matters more than the destination and where you’re entirely on your own. No companions, cut-scenes, tutorials or any of that stuff. Just you and the world. Do keep in mind however that the clock is ticking, albeit slowly; unless of course you choose to speed up the passing of time!

This neat little trick is used to solve all kinds of puzzles, some of which may even involve a specific item (and walking under water). Imagine the following scenario: it’s spring and a lake too deep to cross prevents you from moving further along the path. Pretty much impossible, since you can’t simply jump across to the other side, right? Wrong! Didn’t I just tell you that you can fast-forward? Hint hint.

Just remember to pay attention to how many years remain, or suddenly you’ll be out of time and… well, that’s not good; remember, great disaster and all that. The game might not offer much challenge, and honestly, I think that’s a good thing as it makes the overall experience much more interesting. And as I’m sure you can imagine, a lot can happen over the course of several hundred years (or very little, depending on your actions). You’ll see.

It’s hard to say more without spoiling it, so how about visiting its Gamejolt page and taking it for a spin instead? “I just spent four-hundred years preventing a calamity” won’t make your résumé look better, but it’s still an accomplishment worth bragging about (or maybe not, as some might believe you to be slightly mad from such a statement).