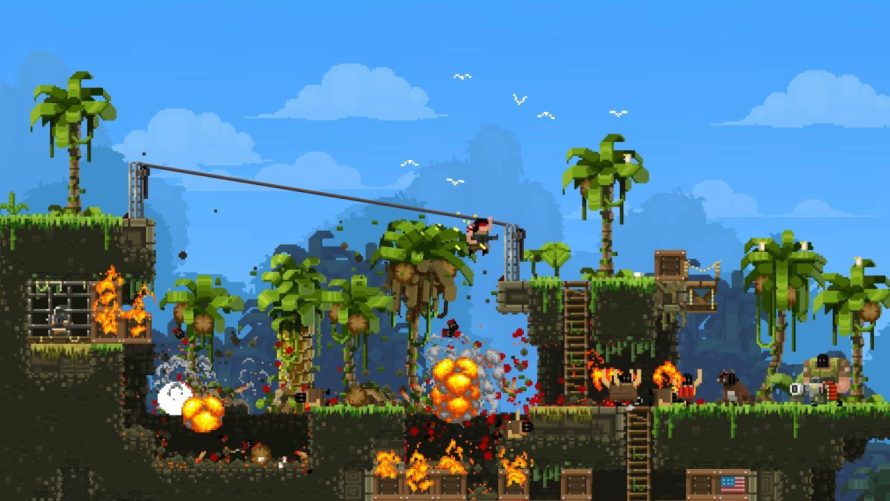 It’s been a while since I last covered this over-the-top action platformer, and man has a lot ever happened since then. A few months back, the franchise expanded with a free Expendables 3 tie-in, and yesterday, the main game got both Steam Workshop support and Steam integration for its online component. Busy developer, eh?

While the latter should hopefully resolve the connectivity issues some players have been experiencing, those who don’t plan on taking the game online obviously won’t find it all that interesting. Now, the Steam Workshop addition, on the other hand, is something for everyone, as it makes sharing custom levels noticeably easier. At the time of writing, it contains a total of 42 submissions, but surely that number will grow over the coming weeks, months… years?

Ain’t just about user-made content either, as both The Brode and Bro Max have joined the playable character cast, alongside new levels, the ability to (finally!) throw enemies and a much-improved level editor. The average IQ of villagers has also been raised, because, why not? Oh, and Cherry Broling got buffed (another ‘finally!’).

The game itself is currently in beta, but according to its Steam page, they’re “targeting a late Summer 2014 launch”, which means it’ll likely leave Early Access any day now. Just a quick FYI, as people missing the alpha/beta/Early Access label on Steam is an all too common occurrence.

Broforce (beta) will set ya back $15 (Humble widget / Steam), for Windows and Mac users. Time to bro up!