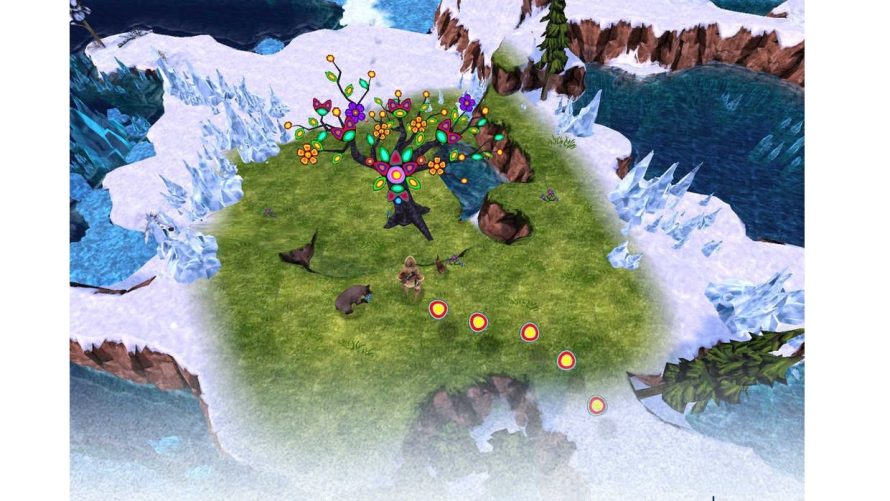 In a land where spirits are used to balance the seasons of winter and spring, it befalls upon Chiwatin, a young native, to maintain said balance. Normally a rather basic task, but one day, mysterious crows decide to kidnap them [spirits], enforcing a permanent winter. Suffice to say, this… means war!

That said, in a much-appreciated twist, his quest need not be one of violence, as there are an alternative, more peaceful means through which the spirits can be recovered. But no matter the path chosen, he’ll need all the help he can get, including – above all else – that of his best friends, Rabbit and Bear. Unsurprisingly, both are as their names depict: a rabbit and a bear.

Now, for the most part, traversing this land is a simple task – until you encounter an impassable gap, that is. There’s hope yet though, for these can be crossed through the power of spirits – provided you’ve gathered enough to craft a bridge! Neat trick, eh? On top of that, if not for Bear, may as well forget about going swimming, as the water in these rivers is too cold for a human (remember, permanent winter). Rabbit’s uniqueness, on the other hand, seems to involve using rabbit holes as an alternate means of transport. Ah, the power of friendship.

Inspired by familiar struggles with bullies and isolation, Spirits of Spring is an empathy game rooted in deeply emotional storytelling. Experience the fiercest loyalty in the most unlikely of places!

Whether Chiwatin and his two friends will be able to banish winter and bring back spring in this puzzling adventure, is for Minority to know and you to find out. Provided you have a semi-recent iOS device that is, because at the time of writing, Android and Windows versions are only “under consideration”. They did port the amazing Papo & Yo to Windows though, so… fingers crossed for a Spirits of Spring desktop release, and sooner rather than later.