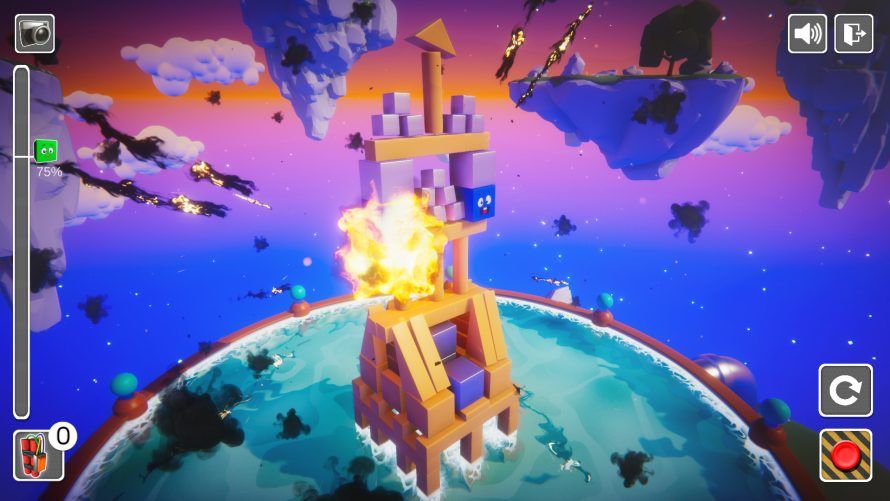 I don’t know why those blue blocks are so darn grumpy, but whatever the reason, they’re going for a swim in Blocksplode. Provided you’re capable of ensuring bombs are planted in all the right places to trigger screen-filling explosions, that is. Kaboom!

What, you think it’s wrong to bully the blue blocks like that? Eh, I’m sure the water will do them good. But if that does not turn out to be the case, at least you’ll have a good time making stuff go kaboom. So what if a few grumpy blocks get hurt in the process, as you make your way through the 90+ levels? Wrong place, wrong time. Sucks for them. Kaboom. Did I mention how explosions are a big part of… ah, I suppose it is in fact right there in the title: Blocksplode. Right.

No blocks were harmed in the making of this video game.
Well, maybe just a few…..

Anyway, send those blues to a watery grave! Yeah! Not feeling like flying solo? Grab a friend for offline party games full of, well, explosions! Or gather up to three additional folks for a fun time with even more explosions. Speaking of online, you can also create your own levels and share them. Just be sure to rate those made by other Blocksplode fans once the debris settles. Which could take a while since, if the trailer below is any indication, levels can actually get rather complex. All the better though. Give me a challenge! Oh, and TNT. Lots and lots of TNT. So what if you only have a finite amount to clear each level? TNT!

I suppose it wouldn’t be right to ignore the fact that not every level consists of sinking blues either as there are those in you’re tasked with… well… preventing gemstones from hitting the water. Grumpy blue blocks going for a swim I get – ensuring gemstones don’t get wet? Not so much. Last but by no means least, how about some minigames? Success in these is apparently tied to ascending a tower of some sort. A nice change of pace after toppling so many. Kaboom?

Blocksplode is available on Steam, carrying a $14.99 price tag.