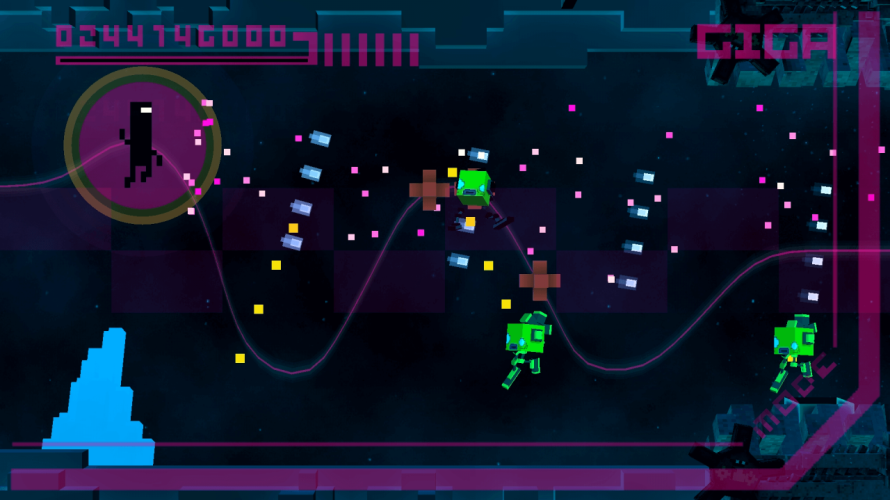 CommanderVideo is back in action, ready to blast bad guys and save the day! That said, his actions are actually rather limited in this sixth BIT.TRIP installment. So much in fact, that all he can do here is glide along a pre-determined path and shoot. Nothing else. Doesn’t stop him from looking cool while doing his job though, even if it takes some getting used to, sliding along like that in twin-stick-ish bullet hell. So weird.

Arrow keys move CommanderVideo back or forth, while the mouse is used to aim. That’s the extent of your involvement with everyone’s favorite tall, dark protagonist, here. Bullets need to be dodged and enemies killed, at which point they’ll leave behind lovely plus-shaped upgrades. Gather enough of these and your arsenal will evolve gradually, until your gun is spraying so heavily that it’s a wonder it can keep at it, indefinitely. Ah, technology.

Should you take a hit, however, the poor commander gets downgraded (or rather, his weapon does), and needless to say, you can only take so many hits before it’s game over. Oh, and there are no mid-level checkpoints. This isn’t much of an issue during the first couple of levels, but once you near the end and bullets really start flying in your direction, being forced to restart an entire 10-15 minute level can be frustrating.

In theory, having a character attached to a rail like this isn’t a terrible idea, but its execution in BIT.TRIP Fate does leave something to be desired. Something like, say, better pacing, as you’re often left shooting down a single foe, maybe two, perhaps even three. But the action rarely reaches chaotic levels, mostly due to how slowly the view pans, compared to CommanderVideo’s max speed (while not shooting, anyway). It’s a bit jarring, honestly, as there you are, itching to blast another bad guy, and yet, the screen’s just scrolling ever so slowly, teasing the player. Incidentally, whenever there is something to do, someone to shoot, it’s definitely rewarding; mostly because the whole thing is so… different. If only there wasn’t so much ‘downtime’.

But like I said, when things get going, they generally really kick it up a notch, mixing the lovely art style and chippy soundtrack with a proper test of one’s reflexes (and aim, to a degree). There’s fun to be had for sure, even if the overall experience is by no means perfect. For instance, grabbing a power-up to have the likes of Meat Boy (yes, THAT Meat Boy!) upgrade your firepower temporarily does not get old. Same goes for the end-of-level boss fights, what with their old-schooly predictable patterns and all. Oh, and these monstrosities are why some refer to BIT.TRIP Fate as part bullet hell…

Those darn things are also the reason for me not finishing the game prior to writing this review, as after getting my you-know-what kicked by level 4’s boss several times in a row, I just couldn’t be bothered to trek through that entire level again. It was fun, but not enough to justify replaying that much for another shot at a big baddie. Mid-level checkpoints would have made my overall impression of the game significantly more positive, to say the least. But maybe that’s just me. Maybe I’m just not patient – or good – enough. Maybe.

As such, all in all, while I enjoyed some of what BIT.TRIP Fate had to offer, the slow pace and punishing deaths made the experience noticeably less than I had hoped. It is a clever and unique concept, having a character move along a pre-determined path/rail like this, no doubt. But clever and unique will only carry the game so far for most, depending on their level of tolerance for the aforementioned annoyances. A fun and recommendable title, even if it is ever so slightly flawed. So… let’s hear it for CommanderVideo’s penultimate BIT.TRIP chapter!