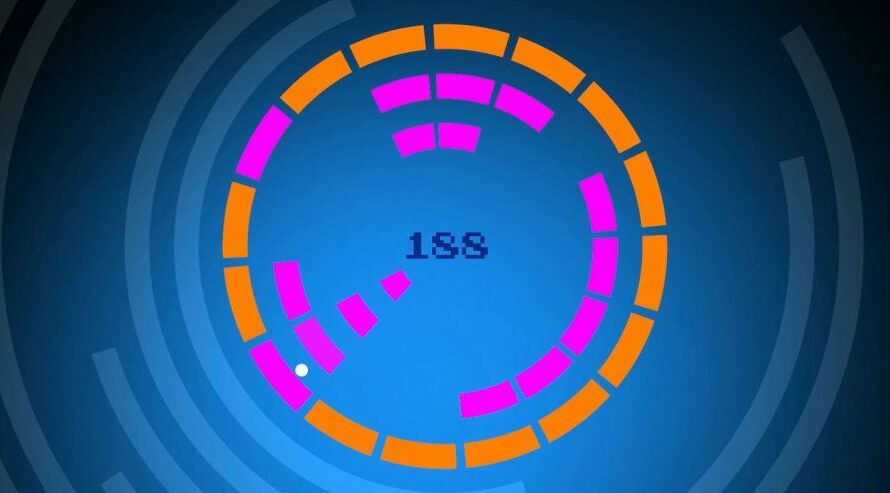 Ever wondered what would happen if someone mixed Breakout with Peggle, and put it into a circular design? Because that’s pretty much how I’d describe Ballkeeper. Only, there’s no paddle and Ode to Joy is not part of the experience. What you do get, however, is a lovely brick breaker with a rather unique twist.

I never saw the appeal of Peggle, but since I grew up playing Arkanoid and Batty on ye ole Commodore 64, at least I’m no stranger to Breakout clones. As such, it’s hardly a surprise that cappelnord’s Ludum Dare 28 creation managed to catch my eye, what with its rotating ‘one ball is all you get’ brick-breaking shenanigans and all. It also has some quite catchy music.

That’s right, just one ball, but this is where things get interesting. See, in just about every clone, the setup goes something like this: you control a paddle, used to stop the ball from leaving the screen and send it flying to bust some bricks. Not so here. Instead, each brick is a paddle on its own. You’ll still have to stop the ball from flying off-screen though, so how can that be accomplished… since you also have to break each brick/paddle for points?

Well, clear a row and you’ll see! But seriously, that is actually how it works. Removing each layer adds another, ensuring you’ll always have something to bounce against; provided your aim is good enough. Spinning and rotating like crazy, trying to get the ball to go exactly where you want, may look like a simple task, and it is… at first. Sooner or later you’re bound to find yourself readjusting constantly, only to watch as the ball leaves the last circle.

But when that happens, which it will, simply hit ‘r’ and try again. Just like in the good old days of Breakout, eh? “Maybe I’ll beat my high score this time!” Sound familiar? If it does, and you have Chrome installed, then go play Ballkeeper right now. Cross-browser compatibility is a WIP, but no ETA yet.