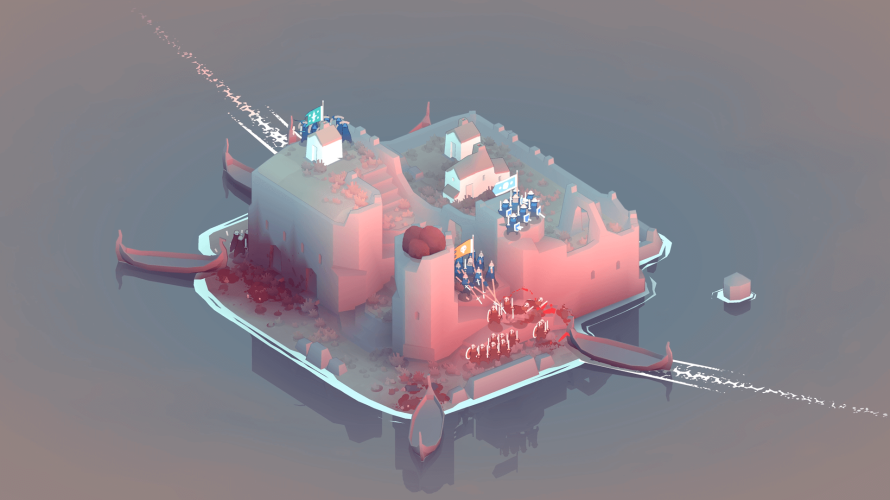 Across many an odd video game, war against Vikings has been waged across many an odd terrain, but none quite as unique as the islands in Bad North. See, while the lot may seem like sizeable battlegrounds, you’ll soon come to find that they are actually pretty darn tiny. There isn’t much room for maneuvering your armies and few if any places to hide against the opposition, ensuring that bouts will be quick… and absolutely brutal. Truly, genuinely, brutal.

Billed as a “minimalistic microstrategy game that is incredibly simple to understand yet packs the challenge of the hardiest RTS games out there”, Bad North places a strong emphasis on quality over quantity. This is done by only giving players access to pocket-sized battalions, rather than a large army, at any time (remember, small battlegrounds), forcing a switch in tactics from ‘strength in numbers’ to ‘few, but strong’. Oh, and the islands you’ll be duking it out on are procedurally generated, further increasing the difficulty through unpredictability.

Hiding behind simple controls are layers of complex systems, with every soldier individually simulated. Tactical mastery of Bad North comes from feeling out these systems and observing soldiers’ behaviours, rather than crunching numbers.

But at the same time, far as I can tell from available assets, there is an absolute ton of fun to be had here, in spite of its punishing roguelite design. If nothing else, it’s bound to be an absolutely refreshing real-time strategy experience, and these days such is much sought-after, as the genre has gotten a bit stale (to say the least). In fact, something tells me this one’s a bit of a mix, blending tower defense with strategy, and of course… certain roguelite elements.

Controlling chokepoints and maintaining territorial control (something something high ground) should play a large part in surviving each encounter/island, each likely spanning the length of a coffee break, given its minimalistic approach. Quite the groovy thing, Bad North, and a game I for one can not wait to sink my teeth into – even if it is almost guaranteed to kick my ass, time and time again.

How about you, dear reader?

Bad North will be available on Switch, Xbox One, PlayStation 4 and Discord, carrying a $14.99 price tag. Steam? Later this year.