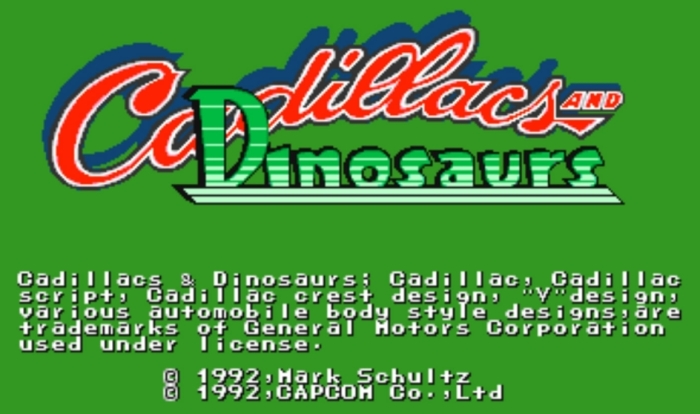 This arcade game was apparently based on a comic book called Xenozoic Tales, which was a tie-in to the animated series. The amount of trivia on the Internet can provide is astonishing. But I doubt you’re here to read about comics or cartoons, ’cause then you’re in the wrong corner of the Internet. You’re more than welcome to stick around though.

So.. Cadillacs and Dinosaurs. Whoever thought of that combination should get a medal. I mean, really, who wouldn’t want to drive a cadillac back when dinosaurs ruled the Earth? Probably not a lot, so it’s a good thing this game didn’t take place in the past, but instead in the distant future – the year 2513 to be exact; though there’s little here that screams “this is the future”, and considering the game was released in 1993, that’s a bit odd. You’d think certain things would have changed in 520 years, right?

Also, even though it had “cadillac” in the title, you only got to drive in one for a really short time during the entire game, while there were certainly more than enough dinosaurs that needed to be calmed down by way of asskicking. In fact, before the credits rolled, you’d have faced off against one or more of the following: Velociraptor, triceratops, pteranodon and.. of course no game with dinos was complete without the mighty Tyrannosaurus!

Thankfully some reptile battles could be avoided, provided you took care of the enemy approaching a sleeping dinosaur before he could wake it! Considering the punch they packed, avoiding the extra trouble was not a bad idea at all. 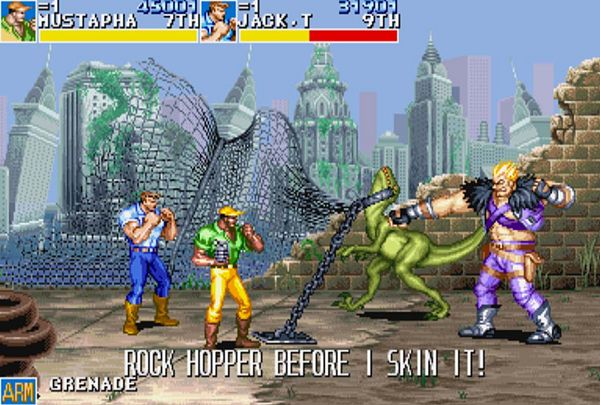 If you felt like evening the odds a bit through other means than simply avoiding certain battles, you had the option of bringing along a friend or two; because like most beat ’em ups from the 90’s, this one let up to 3 players stroll through the lands simultaniously, in search of bad guys to humiliate with kicks and punches. Each character, as shown above, had a strength unique to him/her and upon losing all your lives, you were free to choose a different character, should you so please.

Being an arcade game and all, this one had the all too typical borderline unfair AI, so the cabinet (or “machine”) owner could suck as many quarters as possible out of the player(s), even if most of the time it was only the boss battles that was bad news for your healthbar. Regular goons weren’t the brightest of the bunch and thankfully few even had ranged weapons. 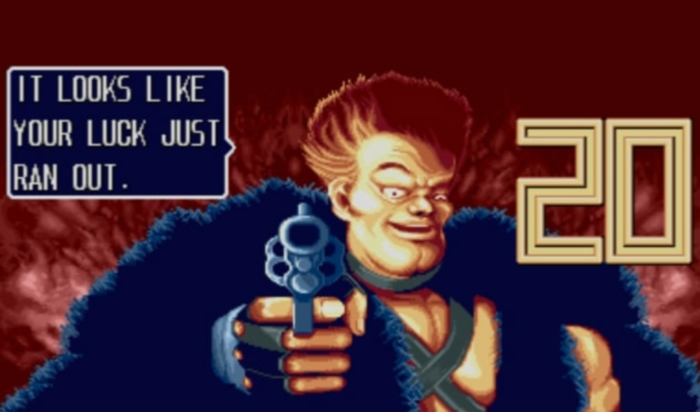 What? You expected me to tell you it was a walk in the park? It’s a beat ’em up from the 90’s, so how could it not have cheap boss battles? Anyway, at least some of these either had a quite nice weapon, or their minions did, which they would gladly hand over – if you provided them with a swift boot to the stomach in return, that is (how nice of them). Although there were only eight stages, each featuring the mandatory end-of-level enemy-with-a-ridiculous-health-bar (aka. “boss battle”), that didn’t stop CAPCOM from recycling both the enemies at a ridiculous rate as well as the boss encounters.. in fact, I think you fight the same boss three times. Wow, CAPCOM. Just.. wow.

Hmm. There’s something I haven’t talked about yet.. what could it be.. ah, the story! We mustn’t forget about the story, because it’s such an important part of any beat ’em up.. no, it really isn’t and I’m not even joking. If you want to read a Cadillacs and Dinosaurs story, your best bet would be to find the comics somewhere though I must say: If the plot of the comics are anything like the game, it really isn’t worth the effort. It’s your typical “bad guy wants to take over the world with gene manipulation” garbage, so it’s a good thing the action is a hundred times better, because the story certainly won’t keep the player hooked here.

Even with an obscure plot that’s been done many times, both before and since, Cadillacs and Dinosaurs still packs a punch (see what I did there?) and I definitely say it’s one of the better arcade games from the 90’s. Unfortunately, it was never ported to a home console, or I would recommend tracking it down for a trip down memory lane, but I hope that what you’ve read here has at least given some insight into the tale of cars and reptiles from 1993, that took place in 2513.. I know, weird stuff but fun times no less. 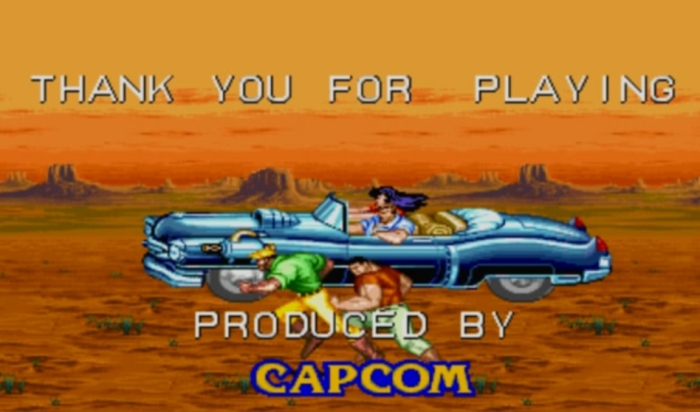