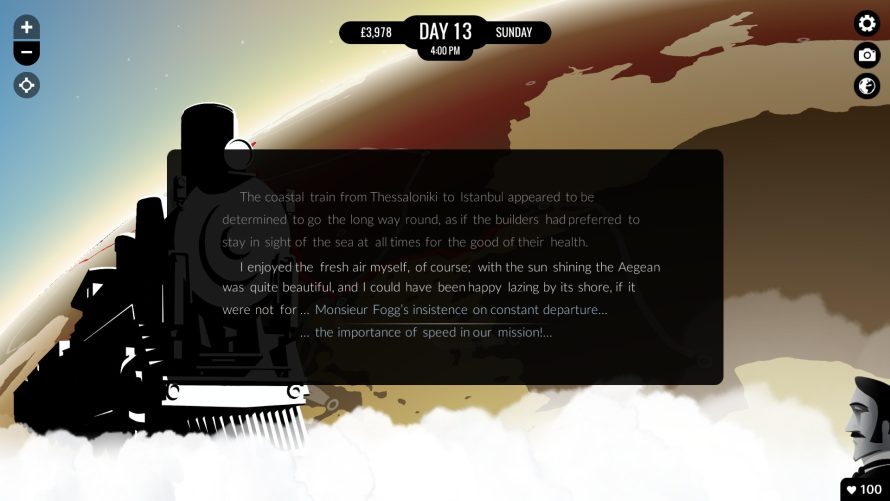 My name is Passepartout, the year is 1872, and while the following statement may seem a tad ridiculous, I have in fact just accompanied my master, Phileas Fogg, on his attempt to circumnavigate the globe within 80 days. The journey was full of daunting choices and experiences, each leading to an event of sorts to be dealt with. Some perilous, other profitable, while some… are best described as ‘genuinely exciting’. What an adventure!

While 80 Days originally saw the light of day on mobile devices back in 2014, the version played for this particular review is not that. Instead, it’s the recently released desktop port, which -- for all intents and purposes -- is entirely void of flaws. Resolution can be cranked up to 1920x1080, and the frame-rate, while arguably not super important for a game like this, holds a steady 60 through and through. Controls? Keyboard or mouse, or a mix of the two; again, without any technical mishaps. Kudos to CapeGuy Games for a job well done.

Now, as far as the game itself goes, what we have here is an alternate take on Jules Vernes’ Around the World in Eighty Days. And I’m not just referring to inkle turning the novel, linear as these things usually are, into a choose-your-own-adventure style tale, complete with random events, inventory, time-table, and financial aspects to manage, either. No, they actually took it a step further, changing the setting to one of steampunk origin, complete with airships, submersible trains, and other fancy technological oddities. Oh, and for the most part, the entire thing takes place in real-time, pausing only during lengthy conversations. 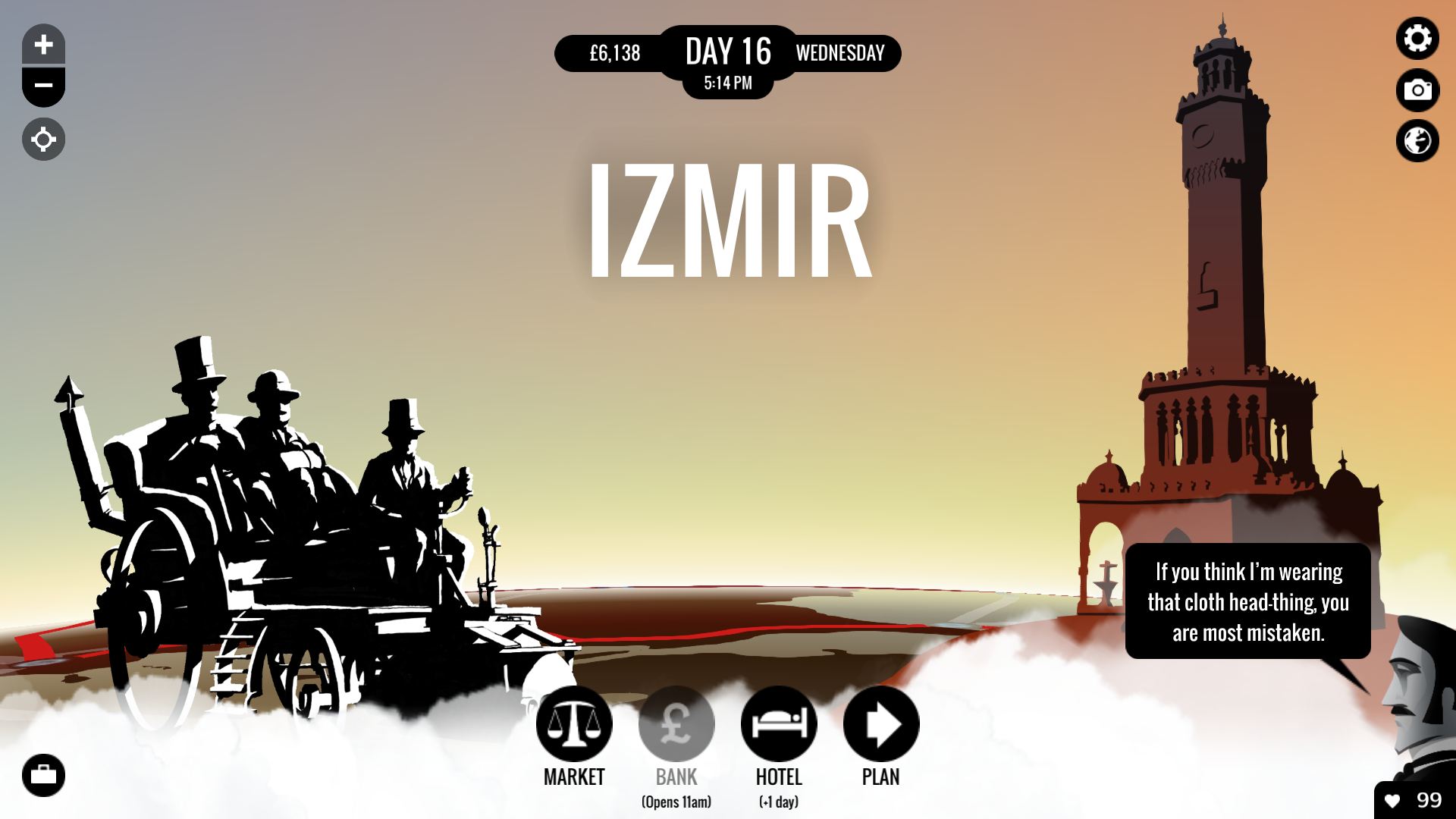 That is not to say you have to spend upwards of eighty actual days to finish the journey, as the in-game clock is rather accelerated. Because of this, you will, however, be forced to act quickly while in a town, seeing how the time of day dictates available options for exploration. Among these is the bank, from where you’re able to manage on-hand finances, the hotel, useful for resting (and fast-forwarding to 6:30 am), and finally, the market, which… well, serves an odd purpose. See, while items in your possession can be sold at any time, purchases can only be made while the market is open. Like I said, very odd.

Speaking of inventory, chances are this part of the experience can be either troublesome, incredibly useful, or somewhere in-between, depending on your planning skills, given its limitations. Sure, additional storage can be purchased, but every now and then, you’ll have to use a means of transportation which only has room for so many suitcases, forcing you to sell items which may or may not prove beneficial further down the road. Realistic and annoying at the same time, yet oddly appropriate, all things considered. 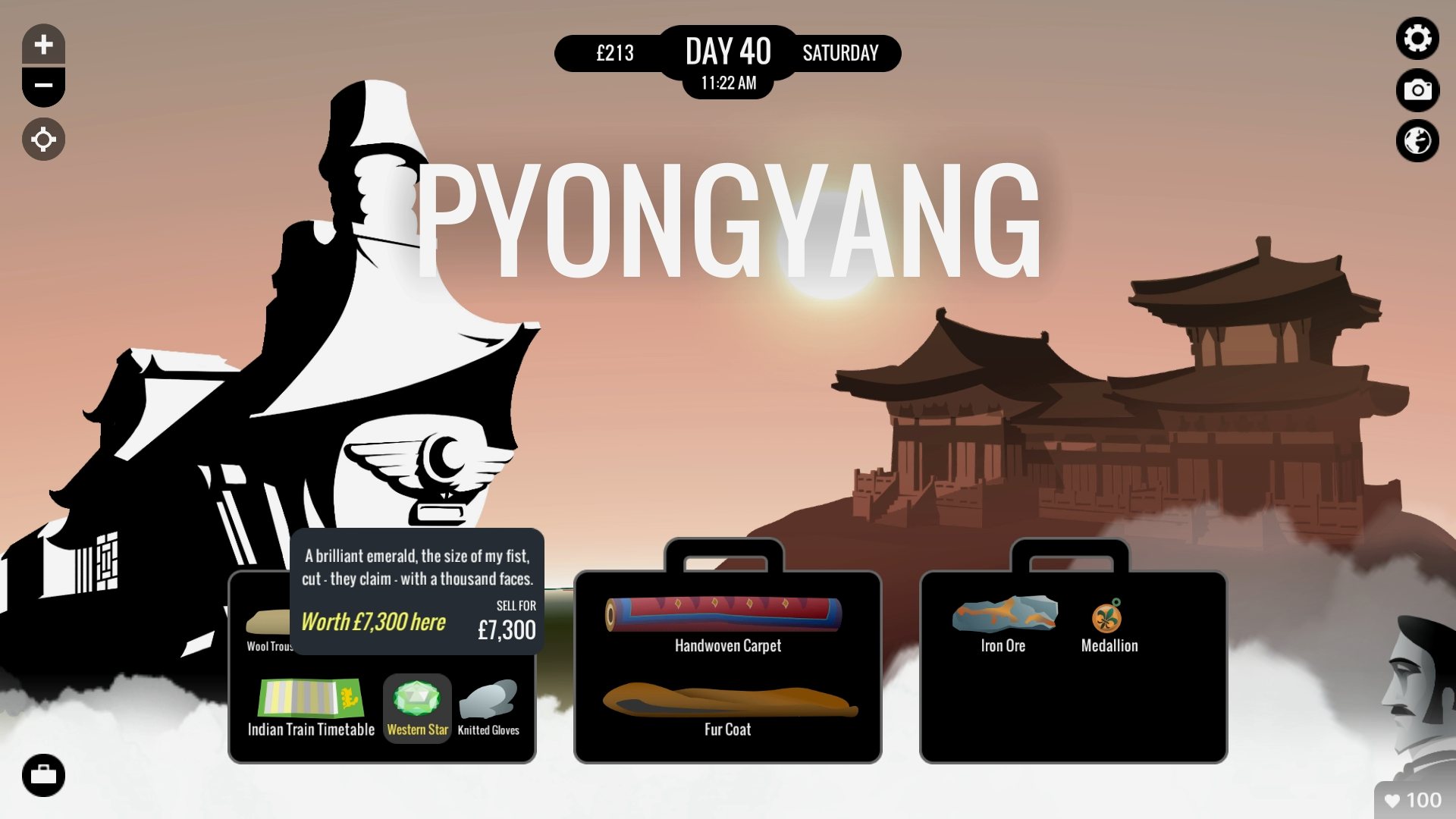 Since transportation isn’t exactly free, save for the rare kindness of a stranger, there’s also financials to manage. The best way to make money in 80 Days is to buy cheap in one country and sell for a profit in one several thousand miles away, which, again, puts a strain on your inventory. On top of transporting valuables across the globe, you’d also do well to take note of the most likely path ahead, acquiring appropriate gear ahead of time. You know, like warm clothes for cold climates and such. Basically… Need. More. Suitcases!

Right. Anyway, I hope your head’s not spinning from the thought of having to manage so many things, because… there’s more. See, in theory, mr. Fogg should be more than capable of managing his own health, and yet, that is not the case. Over the course of this eighty-day journey, you -- as his valet, Passepartout -- will have to keep an eye on it, as even slight road bumps might cause injuries. Fortunately, the opposite also holds true, in that rarely will medical attention be required.

Hard to say what’ll happen though, given the impact certain events can have on your progress, even the safest path not always being just that. Whether it be an action taken during dialogue, the next destination (and how, when, etc.), or something else entirely, each choice comes with its own consequence. There’s not always a way to tell ‘right’ from ‘wrong’ either, as people might not react how you expect them to. Human behavior can be rather unpredictable after all, even at the best of times. 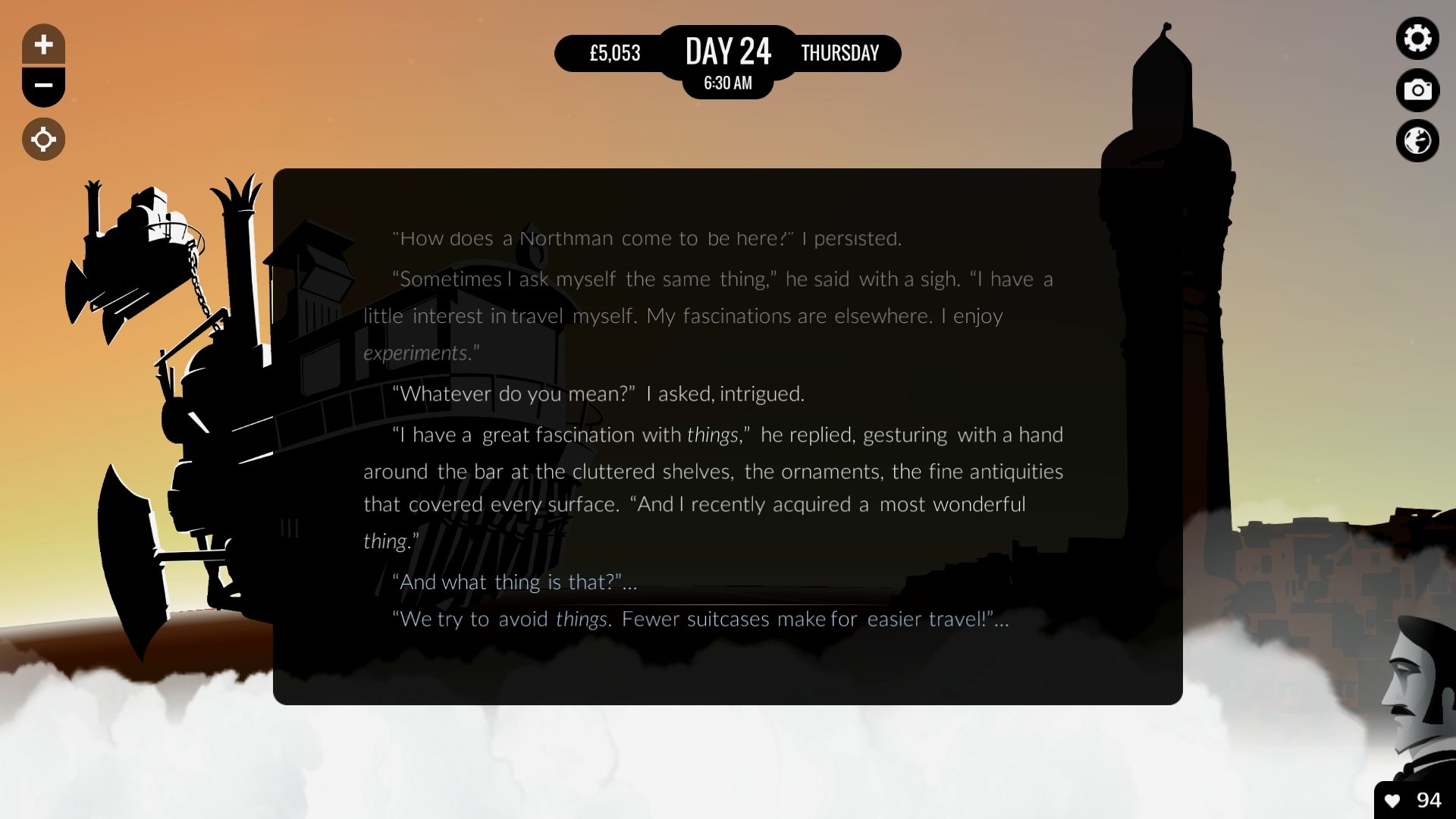 Not thereby saying you should avoid exploring that dark alley or ignore the wounded woman’s cry for help. While the former will likely play host to an ambush and the latter is an equally dangerous trap, the opposite might also be the case. Showing kindness to a complete stranger in a foreign land might seem like a fool’s errand, no doubt about that. But what if said person had a relative with useful transportation, which would, in turn, reveal a previously unknown route? Sometimes you just have to risk it.

Oh and if you plan on actually winning the bet, you’d do well to keep an eye out for additional routes. These are ‘unlocked’ by asking around, exploring the current city, purchasing timetables, and talking to people during transit, to name but a few methods. Do keep an eye on the clock as you prep and plan though, as most public transportation only departs at specific hours, some even only on certain days! Needless to say, seeing how you’re limited to eighty of the latter, there’s not a single to spare.

From Paris to Berlin, Baghdad to Kabul and Omsk to Krimskaya, the clock kept ticking, yet somehow, Mr. Fogg remained quite calm and collect. Well, save for perhaps that one time aboard an airship (which I shall not recollect here, for sake of spoilers). I will say this though: it was rather… amusing, and joined by many other exciting experiences too. As we traveled by land, air, sea (even below, at times!), we dealt with pesky pirates, various political affairs, locals in need of aid, and… everything in-between. Everything. 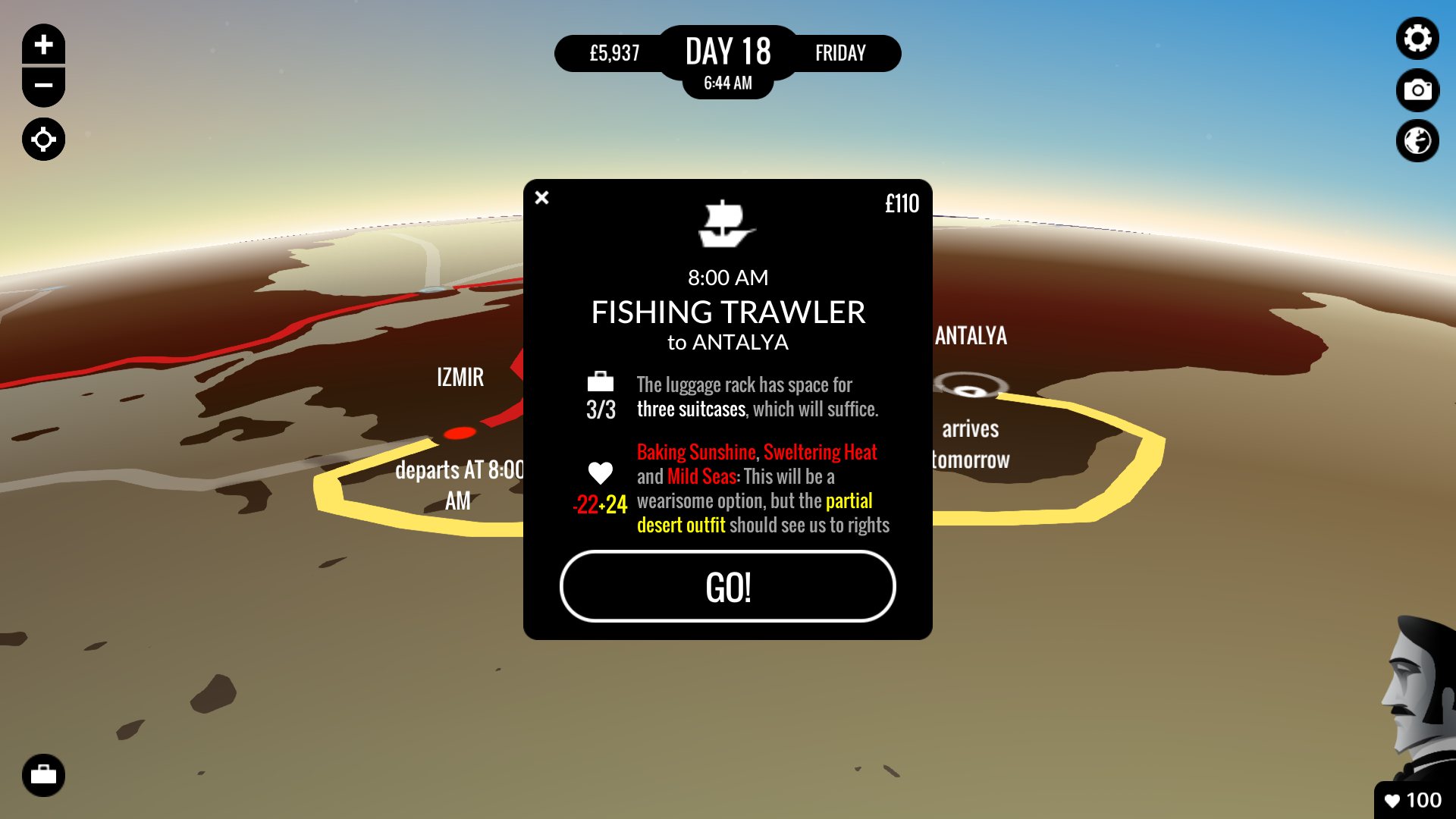 It may have been mostly about winning a wager for my master, Mr. Fogg -- but for me? For me, it was an adventure! Each new city leads to thrilling discoveries, for even if not every locale was sprawling with life and happiness, its inhabitants did always have a story to share -- or perhaps a tip on how to make a profit from transporting certain goods. Suffice to say, keeping my ear to the street was rarely as important as during this particular journey.

Of equal importance is the design of the game itself, as without the crisp, clean interface 80 Days sports, everything readily available, I suspect my overall impression would have been much less positive. That, coupled with incredible storytelling,  proper good characterization and detailed locales -- each with its own unique look -- really completes the experience. An experience that should not be missed, and perhaps even revisited… several times over.