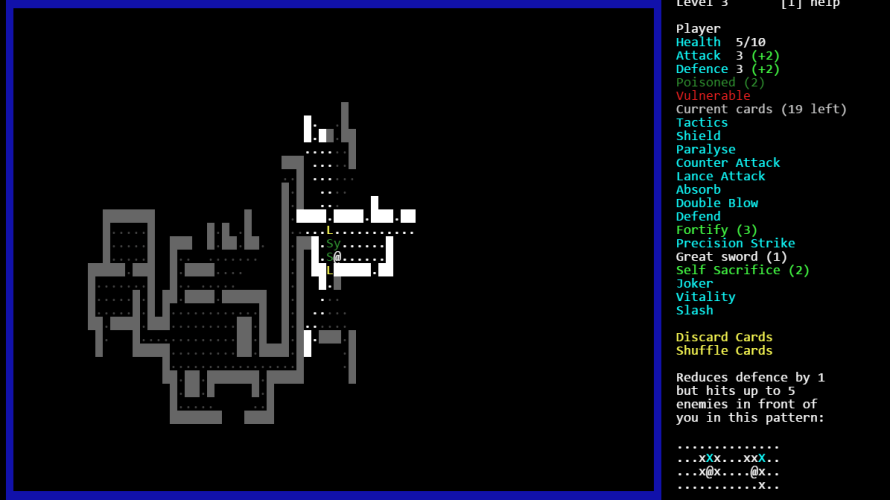 Rogue, Nethack, Moria, Angband – classics. Major, undeniable, awesome… classics. Whether they’ve aged gracefully is a matter of perspective and personal preference, but that doesn’t change their status. If you’re wondering why I’m bringing up such absolutely ancient games, I’ll give you a hint: 7DRL. What is 7DRL? Oh, only an extremely popular yearly roguelike game jam spanning a full week, and in a few months, the 2016 edition will be upon us! Permadeath, procedurally generated content and all that good stuff.

On the topic of rules and regulations, because any good game jam needs a set of such, they really haven’t changed much in recent years. Existing resources, libraries and such, are all okay to use, and you may even draft your project ahead of time (7DRL is a jam after all, more so than a competition). Make no mistake, however: finishing the creation of a roguelike, entirely from scratch or not, can be quite a challenge, depending on how much you want to put into the game. So eh, try not to go too crazy, eh? That said, what’s life as a game developer without a few steep hills to climb? Just remember that the most important thing is to have fun!

Yet again the Challenge lies before us – make a roguelike in seven days or die trying!

Now, registration – once open – takes place here, where lots of submissions from prior years can also be found. An admirable amount to say the least, and one that’ll only grow with each 7DRL outing. Oh and the dates – for those interested in participating – to mark are March 5th through 13th, after which each participant is required to update his / her entry as either ‘unsuccessful’ or ‘successful’, and make it available for playing, in case of the latter.

Facebook Twitter LinkedIn Pinterest Tumblr WhatsApp Telegram E-mail
Previous article Time For 'Space Grunts' to Save the Day or Die Trying, One Turn at a Time
Next article [Update: Greenlit] Stuck In Greenlight Limbo: 'Not Your Space'