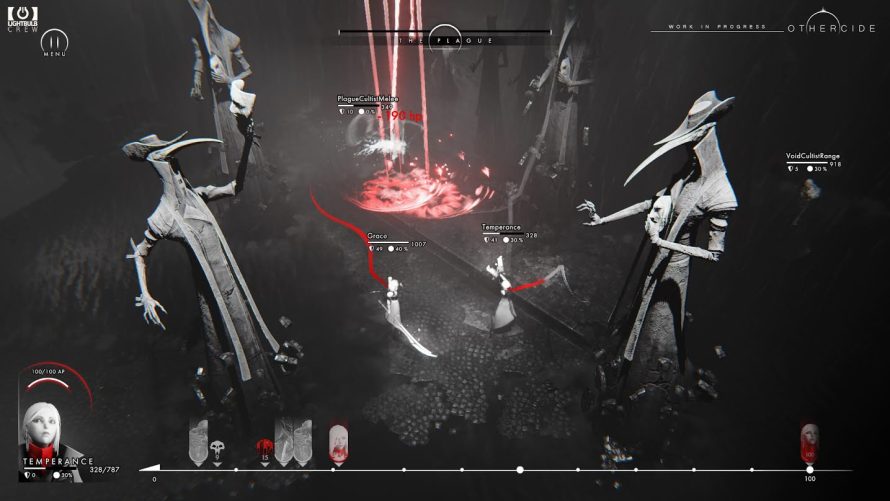 In Othercide, nightmarish creatures from another dimension made a big mistake: they picked your world as the target for their next invasion. They don’t know this yet, however, and in case that part wasn’t blatantly obvious… it’s your job to tell them. How? Oh, the usual way: through incredibly stylish (and brutal) turn-based combat with a very limited amount of resources and, well, permanent death. I like those odds!

But wait, the combat is not entirely turn-based, or rather, not strictly turn-based. Confused? Alright, allow me to explain then: Othercide uses a thing its creator has dubbed the Initiative Sequence system, allowing the player to “predict enemy movements and actions”, potentially interrupting a deadly attack or timing a defensive move accordingly. Chances are you’re going to need every advantage you can get too, as the invaders are not going to play nice. At all.

Oh, my Dear… Can’t you remember anything? What was sleeping beyond the mirror is now awake… The Other is getting stronger. It suffers… It suffers so much. There is an eternal war between our two worlds. How long can we stand …?

Here’s the thing, though: according to the developer, victory is not the only way to progress as even in defeat, new knowledge is acquired and additional options become available (wait, what?). Not entirely certain what that last bit means, although I suspect it’s tied to some sort of meta-progression, seeing how we are dealing with a roguelite here. Even so, make each choice count, every turn worth the sacrifice, and maybe you’ll eventually emerge victorious. Or not. One way to find out.