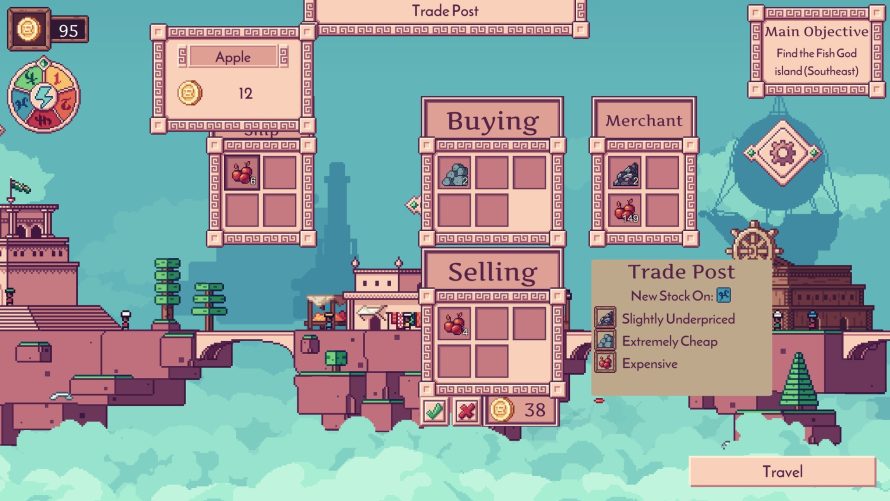 Buy! Sell! Build a trade empire! All this and more, in Merchant of the Skies. Ah, but as with most tales, this too kicks off with, well… humble beginnings, starting you with naught but a small cloudship. Hardly a sprawling enterprise, eh? That said, I am sure that you’ll soon be running your very own trade company, raking up plenty of dough and all that good stuff. At your own pace no less.

What I mean by that last bit is that the whole thing is one big sandbox. Take your time, find the best routes for optimal profit, gather resources, construct a base, journey between (flying) islands, and much more. All in the name of profit. Glorious profit. Profit above all else! Ahem.

Right. Anyway, while the pixelated lure of trade goods production can certainly be enticing, one must not keep in mind that Merchant of the Skies will be hitting Early Access first. As for what’s in this so-called “vertical slice of the game”, well, “trading and basic base-building”. Might not sound like a whole lot, but eh, it’s still enough to make me more than a little interested. Even more so with how they plan on handling additions, tweaks, fine-tuning, etc. -- that is to say, based largely on player feedback. Speaking of which, if you wish to make your voice heard -- outside of the Steam forum that is -- then I’d recommend Coldwild Games‘ own Discord.

Merchant of the Skies [Early Access] will be available on Steam come July 30, 2019.

Merchant of the Skies - Early Access Trailer
Watch this video on YouTube.
Facebook Twitter LinkedIn Pinterest Tumblr WhatsApp Telegram E-mail
Previous article Reunite a Family in 'Ministry of Broadcast' by Competing on Reality TV
Next article Monochromatic Blood Will be Spilled in 'Othercide' as You Annihilate Nightmarish Creatures One Turn at a Time