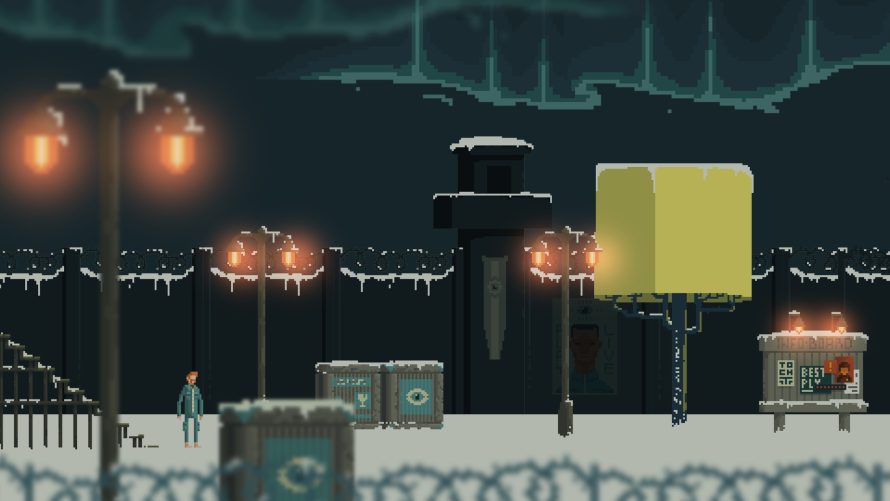 Hope you like dark humor, pixels, and puzzles because Ministry of Broadcast has more than a little of all those things. And reality TV. Yes, really, and it gets better: only by winning on said show will you be able to cross The Wall and rejoin your family. Why? Well, the Regime has decided to ‘filter’ citizens that way, forcing those with a desire for freedom to be on their show. Just remember that losers don’t get reunited with their family.

That said, as I’m sure you’re aware, freedom can come at too high a cost, and in this game, all is not quite as it seems. Hardly a surprise to anyone, seeing how we’re dealing with a country divided by a massive wall and a group – evil, I’m sure! – known as the Regime. Speaking of, why did they build that darn wall, and how, as it seemingly came to be overnight? Walls that split such a large landmass aren’t built in a single day (much less, a single night). Mystery and intrigue aplenty.

Ministry of Broadcast revives the spirit of classic cinematic platformers where players need nimble run-and-jump reflexes as well as a healthy aversion to falling from precarious heights.

Dark humor is also on the menu, alongside some proper groovy Prince of Persia (as in, the original) inspired platforming overflowing with hazards and other obstacles. Mention is after all made on its Steam page of “leg-shattering drops”, “flaming barrels of garbage”, and the classic, “inconveniently-placed spike pits”. Oh boy. Almost makes me wish there was another way for Ministry of Broadcast‘s poor protagonist, but alas, the only path forward is… through all that nonsense. Curse you, Regime. Curse you!

But while agility and reflexes will get him far, keeping an eye out for hints and signs in the environment will take him even further, perhaps even avoid the odd injury. Oh, and never forget that it’s either you or them – if the sacrifice of someone will help you progress, do it. Impale them to create a bridge across that spiky pit! Throw them at a guard to distract him/her! Steal their clothes for a disg – wait, not sure that last one is part of the game. Or the one before it. Well, anyway, hope you’re ready to help the game’s protagonist achieve his goal of sweet freedom because he’s definitely got his work cut out for him.

Ministry of Broadcast will be on Steam and Switch, come Q3 2019.