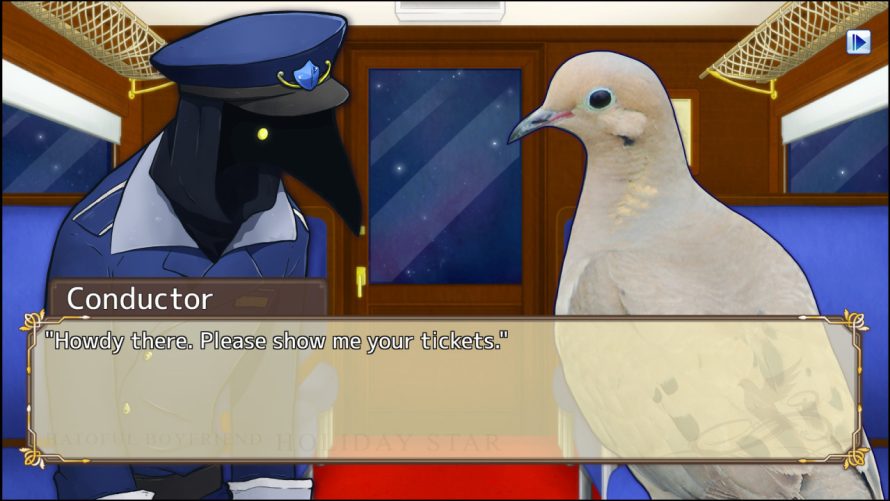 A bird here, a bird there, a bird-bird everywhere. Hatoful Boyfriend: Holiday Star brings a visual novelized winter wonderland full of crazy shenanigans and silly adventures -- birds are stealing Christmas, something about a tank, and maybe, just maybe a bit of romance, all while… dashing through the snow (and so on). The birds are back in town!

Now, before you spread those mighty wings and take flight towards this newly remastered sequel to Hatoful Boyfriend, keep in mind that it is, for all intents and purposes, a sequel. As such, there’ll be plenty of references to characters and/or events from the first game. Likely to the point where those who haven’t played the original might find themselves a tad confused, being a story-driven franchise and all.  Or perhaps the nonsensicalness (it’s a word!) will take them on such a groovy ride, that they won’t notice? Yeah. Unlikely.

It’s not a Hatoful Boyfriend game without a bit of the bizarre like anime inspired magical girl transformations for all your favourite pigeon boyfriends, lab-grown birds stealing Christmas and a mysterious King of the Holiday Star.

Another thing to keep in mind is that the format has changed ever so slightly from the first game, in that this one does not feature a single overarching story, instead spanning multiple different tales. An odd choice I’d say, even with its seasonal theme(s) in mind. But hey, who knows, it just might work! That said, I’m going to be disappointed if the game doesn’t at least have some sort of obscure reference to a Scrooge bird. Yes, really. It already has birds stealing the most wonderful time of year, after all, so why not a peck of Scrooge too, in this interactive tale of delightful, feathered creatures? Merry Christmas and happy holidays, everybirdie!

Hatoful Boyfriend: Holiday Star is available from Steam and GOG.com, carrying a $9.99 price tag and lots of holiday cheer.