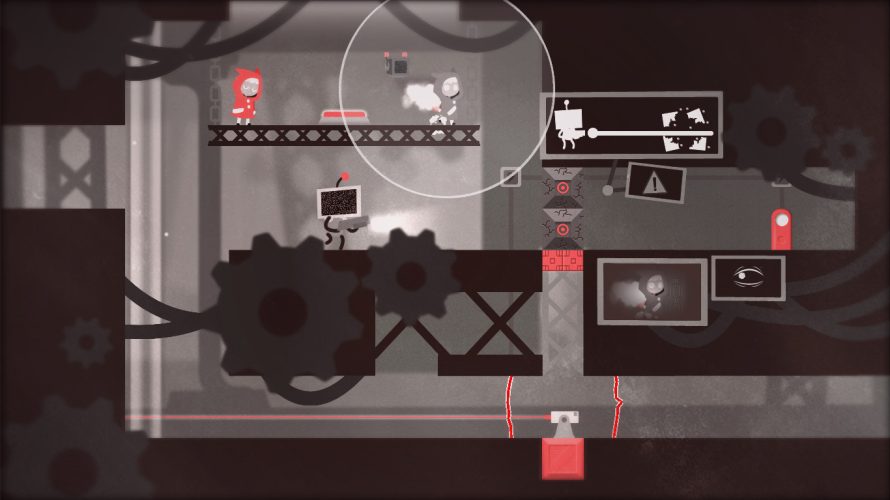 Crash, boom, bang -- those are not the sounds of a ship landing safely, as planned, on Eden. They are however those made by that of BOOR‘s protagonist, a young girl, who, incidentally, is also the only hope this place has. Oh, did I forget to mention that an AI -- a malfunctioning one at that -- is pretty darn determined to wreak havoc across the entire planet? Yup. Why? Only one way to find out!

Now, in case you hadn’t noticed already, BOOR is pretty. Really pretty. Prettier than the majority of other 2D platformers, I’d say. But stylish visuals do not a great game make (they do help, though). Entertaining gameplay does, and far as I can tell, this one has plenty of just that, what with robots, puzzles, secrets, and mysteries to mess with -- all while the player throws a clone here, a clone there, a clone everywhere. You get a clone! And you get a clone! Clones for everyone.

Can she uncover the planet’s many mysteries? Will you help her survive the A.I.’s murderous intent and bring peace back to Eden?

But seriously, cloning is a big deal in this game, and it seems you’ll be able to ‘bodyswap’, which is bound to come in handy for certain puzzles. Puzzles which will undeniably involve outwitting pesky robots and environmental hazards. Then again, that’s what clones are for, right? Just remember that while quite groovy, they do have a very limited lifespan. Send in the clone(s)!

Intriguing, eh? I like to think so at least, which makes the Steam release of BOOR being close to a full month away kinda… annoying. All good things come to those who wait, though, and February 14th isn’t exactly the distant future, ya know?

[TRAILER] BOOR - Steam Trailer | BadLand Publishing
Facebook Twitter LinkedIn Pinterest Tumblr WhatsApp Telegram E-mail
Previous article Give It Up For the 2017 Indie Games Festival Finalists!
Next article In 'room13', Your Face Hangs in the Balance Between Life and Undeath