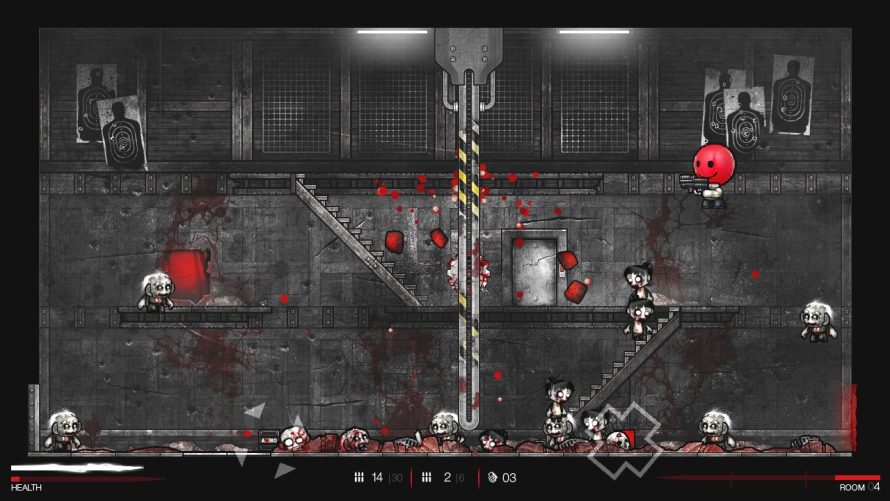 Who doesn’t love a house full of zombies? I suppose it’s slightly less enticing if you’re actually trapped in it, which is the case for room13‘s protagonist… but hey, that’s what guns are for! Guns which are plentiful in this gorefest of a 2D platformer, provided you’re able to acquire the parts required for assembly. Until then, you’ll just have to blast the undead with rather basic arms, hopefully stopping them from eating what little is left of your face in the process.

Oh, did I forget to mention how your face is, well, more or less gone? Yup. It is. Life sucks, and there’s not much you can do about it, so might as well go on a killing spree. More than enough targets available after all, and who’s to say a brand new face (wait, what?) isn’t available somewhere among them? Spoiler: you get to collect AND wear additional faces over the course of room13, each providing a specific advantage in your battle. Why? Horror game logic. Don’t question it. Ever.

Pick a FACE. Build your KILL MACHINE. Slaughter the DEAD.

On the topic of combat… let’s just say that, unless I’m way off, there’s some serious killing machine potential here. Literally, given the customization options for weaponry, whether it be melee or ranged. Might even be some stuff that goes boom in there (gibs away!). Or not. According to its creator, there is, however, a reanimated shark’s head. Cue Jaws theme and get ready for a bite. A big bite.

Facebook Twitter LinkedIn Pinterest Tumblr WhatsApp Telegram E-mail
Previous article In 'BOOR', Against a Murderous AI, Physical Multiplication Will Be Your Greatest Strength
Next article The Greenlight Groove: 'The Moonstone Equation' and... more?