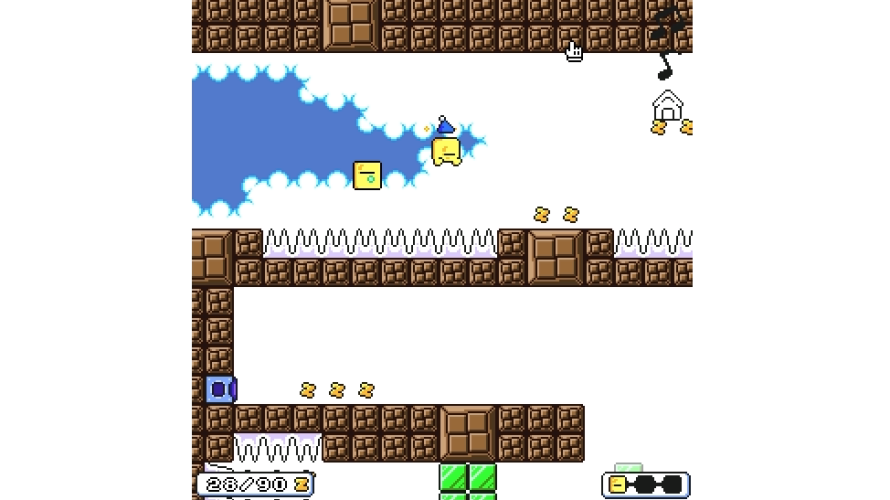 Do you know what sounds like a good idea right about now? Sleep. Then again, when is that not the case? Certainly seems to be a big deal for the protagonist of Yellow Dreamer, as he’s determined to collect as many Z’s as possible. Yup. Not sure how he’s able to create platforms out of thin air though, but maybe… he’s actually dreaming? Maybe.

Whatever the reason, that is a pretty neat trick, and one that you’ll be using a lot, throughout the game’s five levels. Each [level] contains a number of Z’s, scattered throughout the area, of which you’ll have to collect a certain amount before the exit will open. Simple enough. I mean, dude can create his own platforms, so how hard can it be?

Actually, pretty easy, which is the only genuine downside to an otherwise entertaining platformer, put together Z by Z, for Nitrome Jam 2014. Aside from a few switch-based puzzles that either activate or remove platforms of their color and a few spike pits, there isn’t much here in terms of challenge. The fact that you can only make so many platforms before they begin to disappear in order of creation does add a bit to it though.

Also wish there were more levels, as the ending comes rather abruptly, just when it starts to get interesting. Who knows though, maybe we’ll see a post-jam version of Yellow Dreamer at some point down the road? Or maybe not. What’s there is fun though, in spite of its short length and low difficulty; so… how about catching some Z’s?