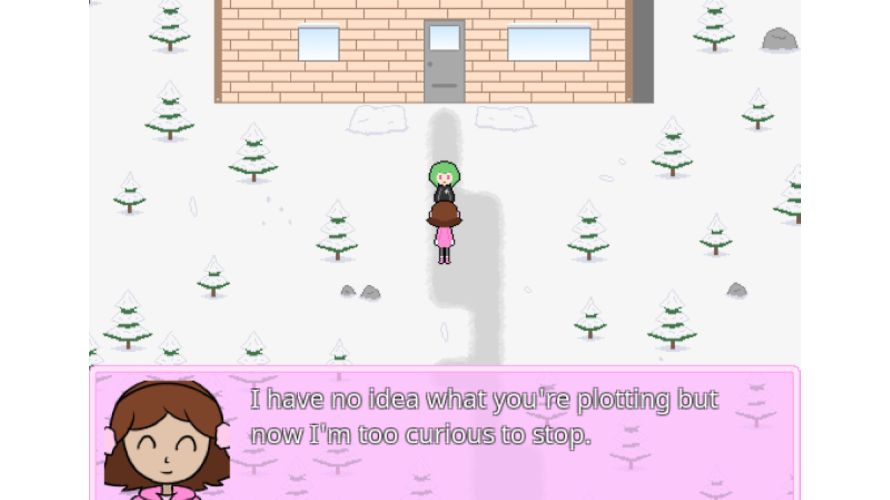 Moving to a new town where you’re a complete stranger can prove quite challenging; doubly so for Emily, who’s more than a little shy around strangers. And yet it’s not long before she musters up the courage to introduce herself to Linnea, her new neighbor, which leads to them going off on an adventure together… perhaps in search of some Winter Magic?

Oh, completely forgot to mention that the town is apparently full of witches and that Emily’s reason for moving there was to, well, “befriend the local witches and learn magic”. Not a bad plan, right? Yeah, sure, except who’s to say they’re nice witches? For all Emily knows, they could be the meanest bunch around, perhaps even downright hostile! Then again, fate does favor the bold, or some such, and at least Linnea seems to be a good-spirited young girl. A witch? Ah, you’ll just have to play the game for the answer to that one.

That goes for experiencing their adventure near the small mountain too, cliffhanger ending and all. Yup. Even though Winter Magic does wrap up on a somewhat conclusive note, I for one am looking forward to whenever its creator, Kami (@KyaniteHeart), decides to continue the adventures of Emily and Linnea. I mean, the final screen says ‘to be continued’, and its itch.io page has “I also intend to make a sequel to this some day!” following the game description. So… hopefully sooner rather than later.

For now, how about pointing your browser in the direction of itch.io, for some lovely Winter Magic?