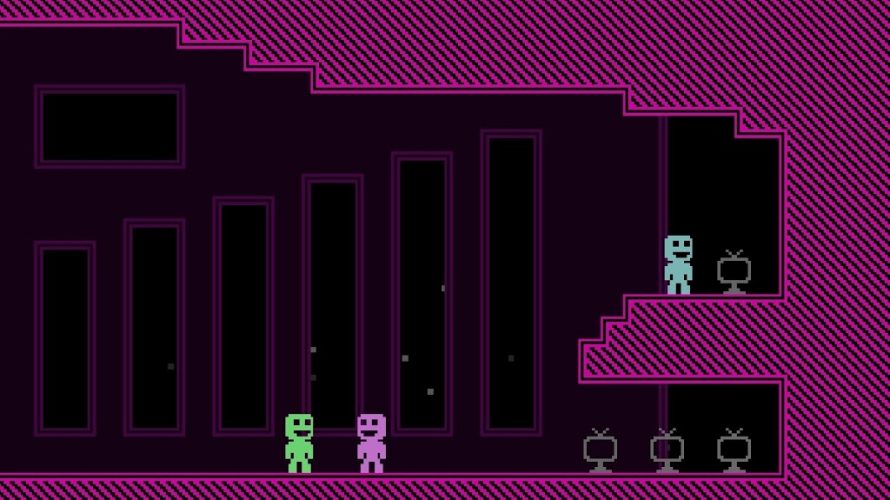 Upon launching this one the first time and navigating the menus to start a new game, it didn’t take long for the band to start playing and the tune was quite familiar: VVVVVV was a trip back in time!

And not only in the visual and gameplay departments but also quite so with the difficulty. Had the game not informed me immediately that I could not jump, but instead reverse gravity, I would have questioned the physical abilities of the character I controlling, since even the first obstacle (a nasty row of spikes) would seem insane to even attempt a jump across. Yet I tried to do just that… I jumped continuously and furiously, thinking the game was trying to trick me. There was no way this ‘Captain Viridian’ was able to defy gravity. The game looked like a 2D platformer of days gone by, so my mind went straight to genre-defining titles the likes of Super Mario Bros. where jumping was crucial.

Boy was I surprised… and dead. Again and again. And again. It didn’t help that Captain Viridian had a depressed look on his face either, that’s for sure. Even with a checkpoint nearby, my futile attempts at trying to defy the game got boring eventually, so I decided to play the way it wanted me to and what d’ya know, gravity was defied, the spiky path was behind me and the lovely game (available on PC and Mac) could begin! 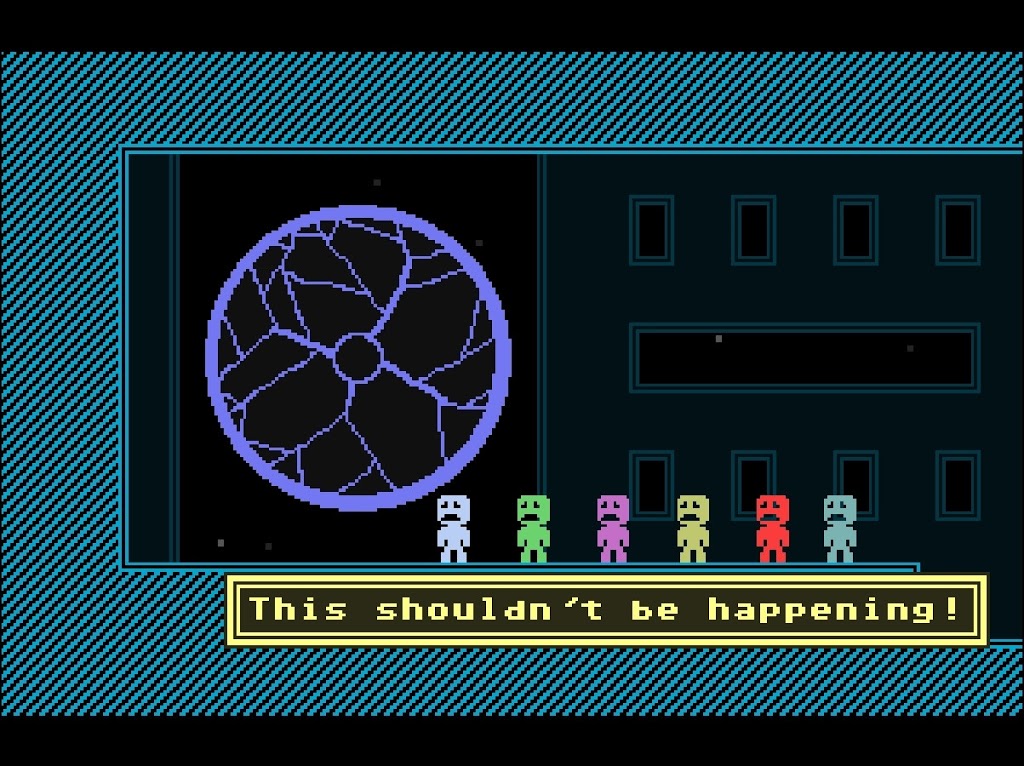 Gameplay takes precedence over story here, but still…
Don’t go into this one expecting a deep plot. There is a story, but it’s kept to a minimum – no long dialogues, cut-scenes or even much in the way of a story. Captain Viridian is a simple man, dressed entirely in cyan colored clothing. In fact, everything is simply nice and peaceful, complete with happy music, but.. that would not make for much of a game so obviously something goes wrong. The alarm sounds and everyone abandons the ship through a teleporter and to find out what happens after that, you’re gonna have to play the game! Ha!

The controls are simple: You can reverse gravity, go left, go right, open your map (more on that in a second), each done with the press of a specific button (that to my knowledge can’t be remapped).
VVVVVV takes after Castlevania/Metroid in the exploration aspect, so a map is vital and thankfully implemented nicely. From the pause screen, the map can be displayed, showing explored areas along with specific locations. It also tells you the status of all your crew members, how many times you’ve died, how long you’ve played on your current save and how many trinkets (out of 20) you have found. 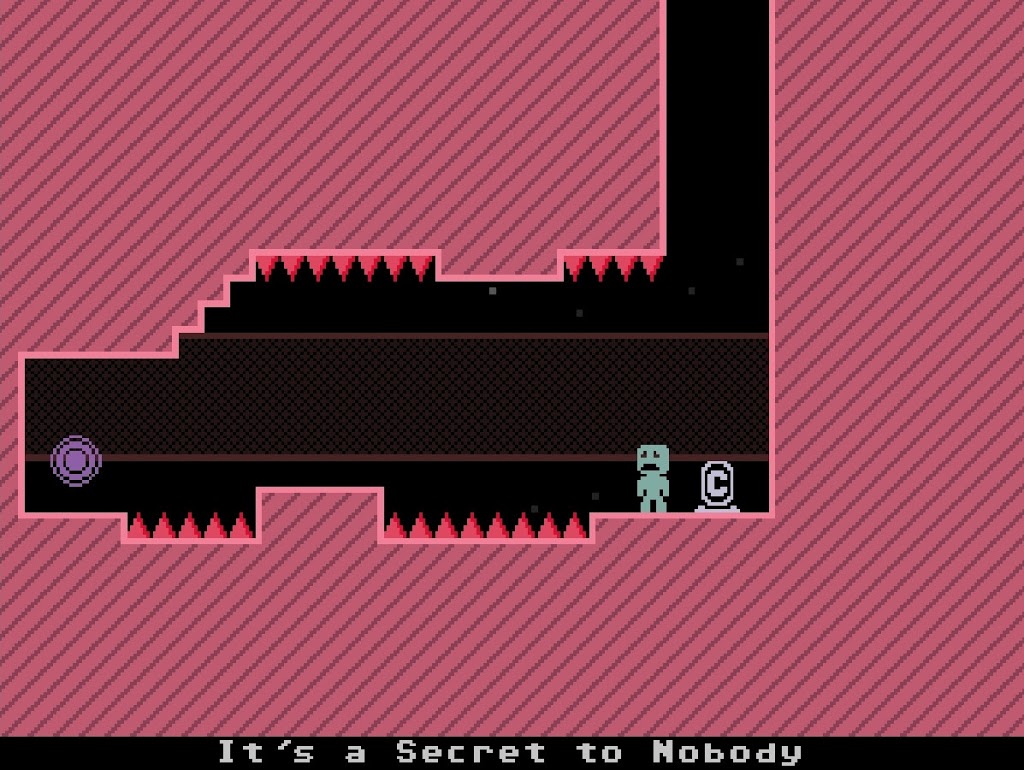 Trinkets? Collectibles? Fork ’em over!
Even a simple game like this has collectibles and they actually serve to unlock stuff. But if you want to find out what they unlock, either collect them or hit Google. No “cheats” here 🙂

But while on the topic of additional stuff – with the 2.0 update, the game got a level editor, allowing fans to create their own levels for everyone else to enjoy. A great idea for a game like this, since letting fans show what they would have made were they working on the level design of VVVVVV is bound to excite more than just a few people.

The visual style is simple, yet a perfect fit along with the music.
Graphically the game is certainly no powerhouse, but that does not mean it’s lacking charm or visual appeal. It’s not trying to revolutionize the way 2D games look, but more likely, the developer intended to show that graphics can actually take a backseat to gameplay with good results. I’m not saying that every 2D game that has fancy graphics is lacking in gameplay – quite the opposite, with games such as New Super Mario Bros. Wii on the Wii and Shadow Complex on the Xbox 360 showing off equally high-quality graphics while not leaving gameplay as an afterthought. So it can be done, even on the Wii which is in no way a beast of a machine.

A few final words…
There is no violence in this game, apart from getting the poor captain killed over and over again – which is unavoidable unless you’re a formidable gamer. I have intentionally not covered every feature in this game here – where would the fun be in that, when you could instead play the game yourself and marvel at every discovery? If you can manage the at times rough difficulty, possess a certain level of patience and don’t require shiny HD graphics with explosions to rival Michael Bay’s latest production from your games, that is. But even if you have a short fuse, I still recommend at least trying the demo at the official website (where it can also be purchased, should you so desire).