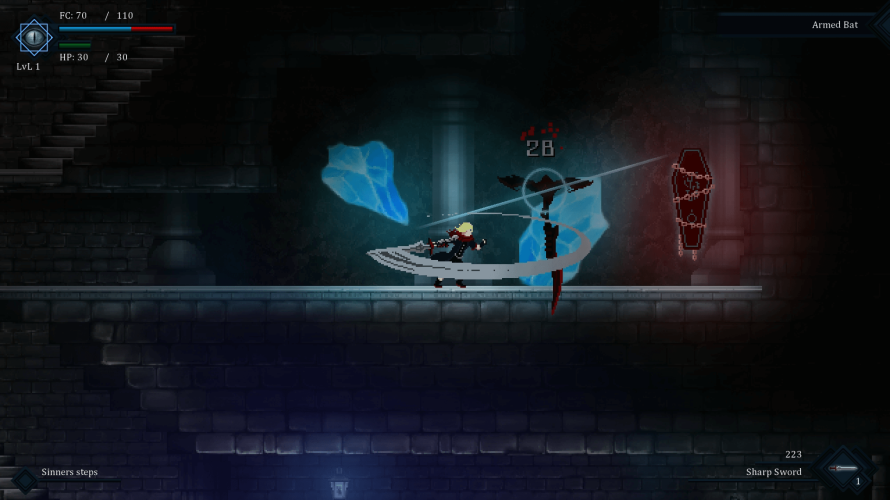 From the moment the Usurper demo begins, the tone is set and you better believe that it is played to a wonderfully weird melody. One of demonic horrors, wizardry, oversized weaponry, and of course, a grand evil to vanquish. All that and more, in this alternate timeline 1989 London; or rather, some of it, as this demo does offer but a slice of the stylish action. What a slice, though!

Now, as for exactly who, or what, Waltham – the protagonist – is… well, that’s honestly a bit of a mystery. For now, let’s refer to him as a body-possessing, short-fused, grumpy demon. Oh, did I mention he has a bit of an attitude problem, and that, on top of that, he’s quite possibly the only one capable of sending these otherworldly invaders back to, well, anywhere but here? Yeah. We’re doomed.

Or maybe there’s hope yet. Maybe this annoying body-hopping (wait, what?) fella’s crusade to ascend The Citadel and take down the Navigator won’t end horribly, cursing mankind for all eternity. Maybe. Hard to say at this point, though, as the demo didn’t really allow for a lot of exploration, nor did it overwhelm me with details as to exactly what’s going on. Just enough to move things along, offering a taste of things to come in the form of NPCs selling everything from spells to weapons, and of course, areas marked as being under construction.

Sharing your body with a demon (hence the ‘body-hopping’ bit) does bring about certain advantages, however, such as the ability to… uh, well… “realign time and space in a short burst”; basically, a fancy dodge move. That and, you know, resting on a throne to replenish lost health and saving progress up to that point. Why? Demonic powers. More specifically? No! Curiosity killed the cat after all, and I’d rather not raise Waltham’s already high level of grumpiness by forcing him to look for a new host…

As far as slashing, smash and spell (as in, magic) our way through a finished version of Usurper, part demon, part knight, all hero, that’s not going to happen until at some point in March. This March. Which is next month. So not a crazy long wait, ya know? For now, do try the demo and check out the Greenlight page. Onward!