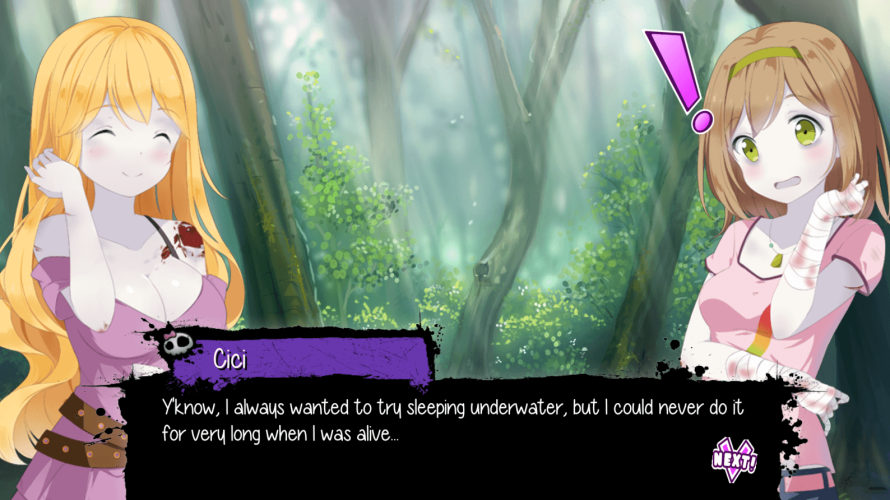 At this point, there really is no way to have an apocalypse without zombies. But… what if they were still half-human, their hearts beating in the name of justice and all that good stuff? Because that’s exactly the case with Undead Darlings, a visual novel / RPG mix which has you playing the part of Reginald P. Happenstahnce on a mission to find a cure. Oh and get this: ass-kicking will be handled entirely by a crew of half-zombie-half-human girls, rather than the protagonist!

On a related note, don’t let the visual novel aspect fool ya into thinking the inclusion of RPG elements is but a mere afterthought. I mean, there’s be loot to amass, sprawling encounters to tackle -- with potential for complex tactics -- and dungeon-crawling through maze-like corridors filled with traps and other hazards, for starters. Kinda standard stuff, sure, but that doesn’t automatically make it bad. And with “a script of over 300,000 words and more branching dialogue choices than you can shake your boomstick at”, culminating in one of nine different endings, suffice to say, there’s also plenty dialogue and story elements.

Our goal is to infuse those core characterizations with contemporary twists and meaningful dialogue inside of a comedic shell that will enhance their complex and often tragic backstories. These characters have suffered a lot -- both before and after their undead infections -- and some of their experiences may hit close to home for some players.

Now, to survive this particular apocalypse (or funpocalypse, according to the developer), your best bet is to utilize appropriate attacks that exploit weaknesses, cranking up the multiplier in preparation for some truly devastating hits. Might be easier said than done in some situations, but keep in mind that should you attempt to smack an enemy with something he/she/it is not weak against, well, bye-bye multiplier! Also, weapons in Undead Darlings have a limited number of uses, which is yet another thing to keep in mind as once this number reaches zero, it’ll be useless. In combat anyway…

Note that while there may or may not even be a funpocalypse unless the Kickstarter beast is slain, with 26 days to accumulate the remaining $27,109 (of $45,000), there’s still plenty time to win this battle! What, interested in pre-ordering? Well, that’ll be $18 (Windows, OS X, and Linux, via. Steam), with an April 2017 release window. Very groovy. Also, brains.